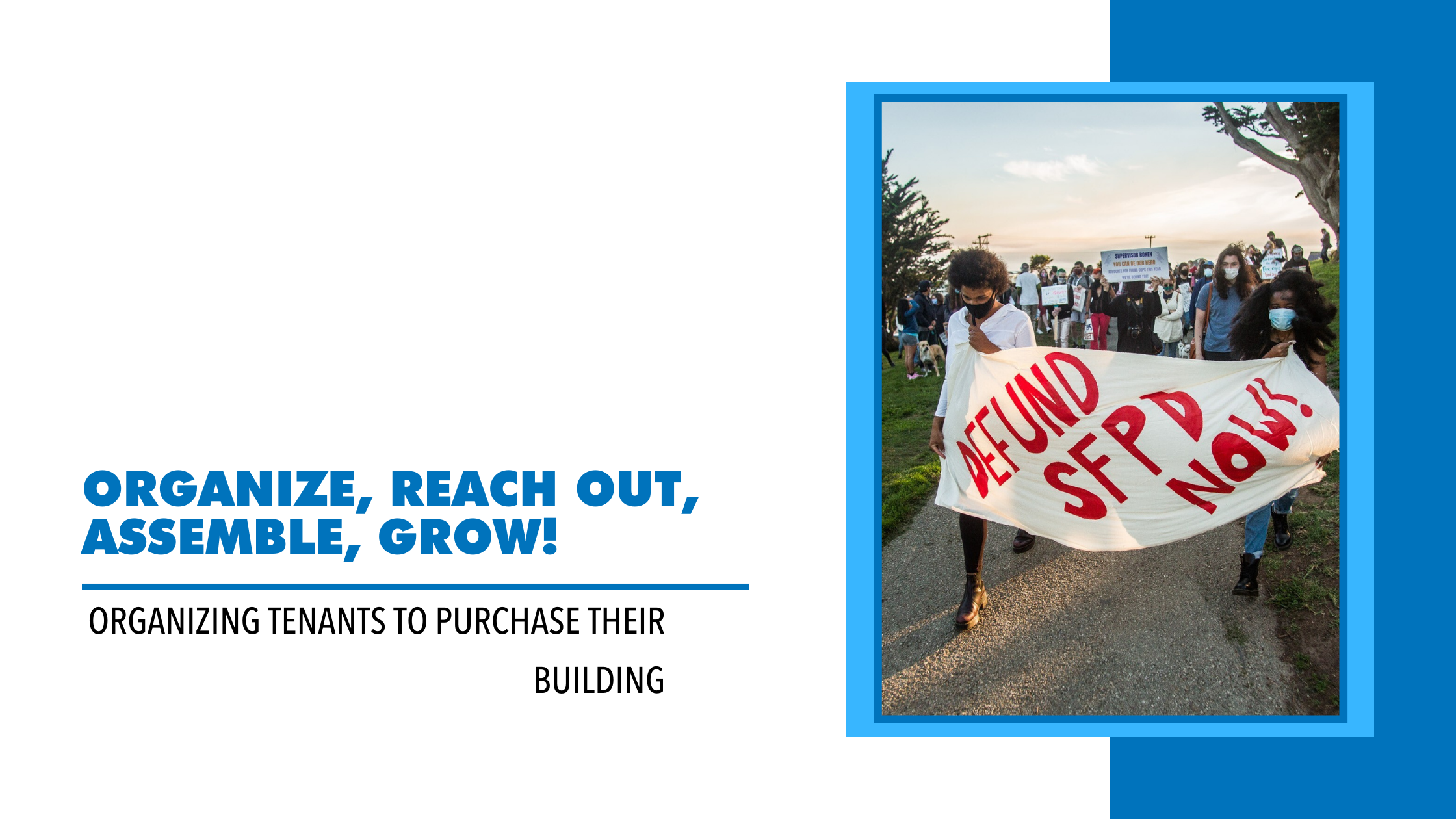 My name is Hope Williams and I am a legal apprentice at the Law Center's Radical Real Estate Law School. I’ve been an organizer and renter in San Francisco for over three years and have played a role in the newest wave of a tenant uprising. According to a San Francisco Planning Report, in 2015, 56 percent of the residents in San Francisco were renters. 56 percent! With the advent of COVID, now more than ever, we must help each other and consolidate our power as tenants because there is strength in solidarity. Being able to fight alongside the most vulnerable communities in this city has taught me a lot.

I believe that knowledge is power and am excited to share what I’ve learned over the years in my time helping tenants organize to keep their homes. California is in the worst housing crisis in recent memory. In order for everyone to have a home, housing needs to be decommodified and taken off of the speculative market. Organizing for cooperative housing is a first step towards decommodification.

Often known as a co-op, cooperative housing is an alternative to home ownership or renting an apartment. Residents collectively own the building they live in and work together to pay for its maintenance and perform other duties. It does away with the landlord and gives residents control over their own housing.

One hopeful example of tenants organizing to purchase their housing is Coop 789. In the summer of 2018, a group of North Oakland tenants in what would soon become Coop 789 found out their landlord was going to sell their building. Lucky for them they came together to try and figure out how they could stay in their home. They were all afraid because they knew that they had affordable rent (in part because the landlord didn’t maintain the building at all). Their rent was below market rate and if someone were to buy it, they believed that the buyer would have ulterior motives and figure out a way to kick out the tenants.

What steps did these tenants take to purchase their building?

There are some basic tenets of tenant organizing. The best resource I have found is an organization called Tenants Together. They have a pretty good lock on how to organize. I swear, start here and you will be well on your way to building people power to purchase your building: 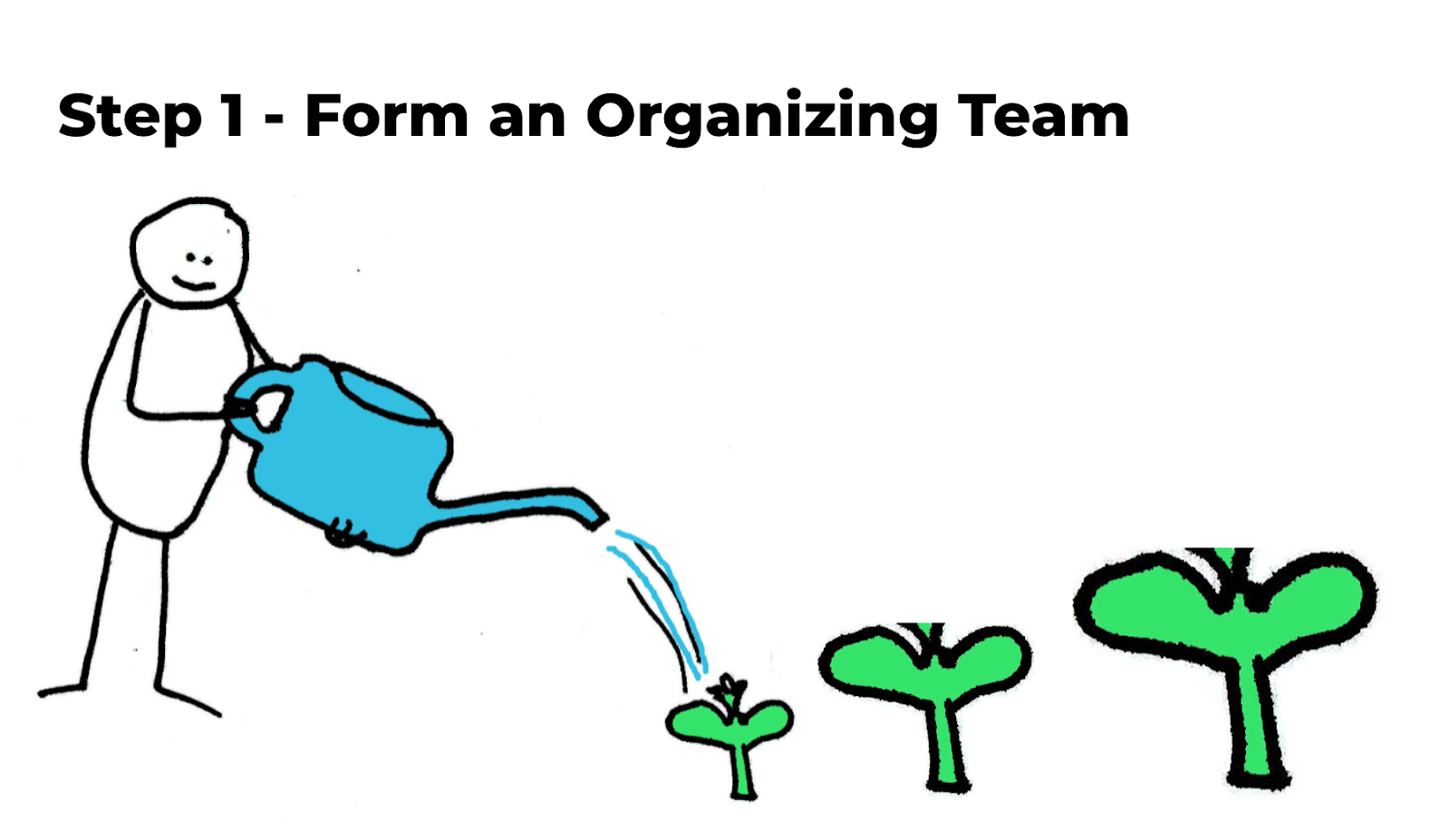 The organizing team is usually around 3-4 people, tenants who want or are interested in forming a cooperative. Talk about your vision of what you want to do together and how you want to do it. The more unified you can be, the stronger your seed will grow. Coop 789 had seven residents and they worked together to fight for their home. If you live in a larger building keep in mind that you might have a few neighbors that won’t be so warm to the primary objective. It’s okay! That’s normal and a natural part of the process. My motto is to begin organizing with folx you trust so it’s ok to start small. 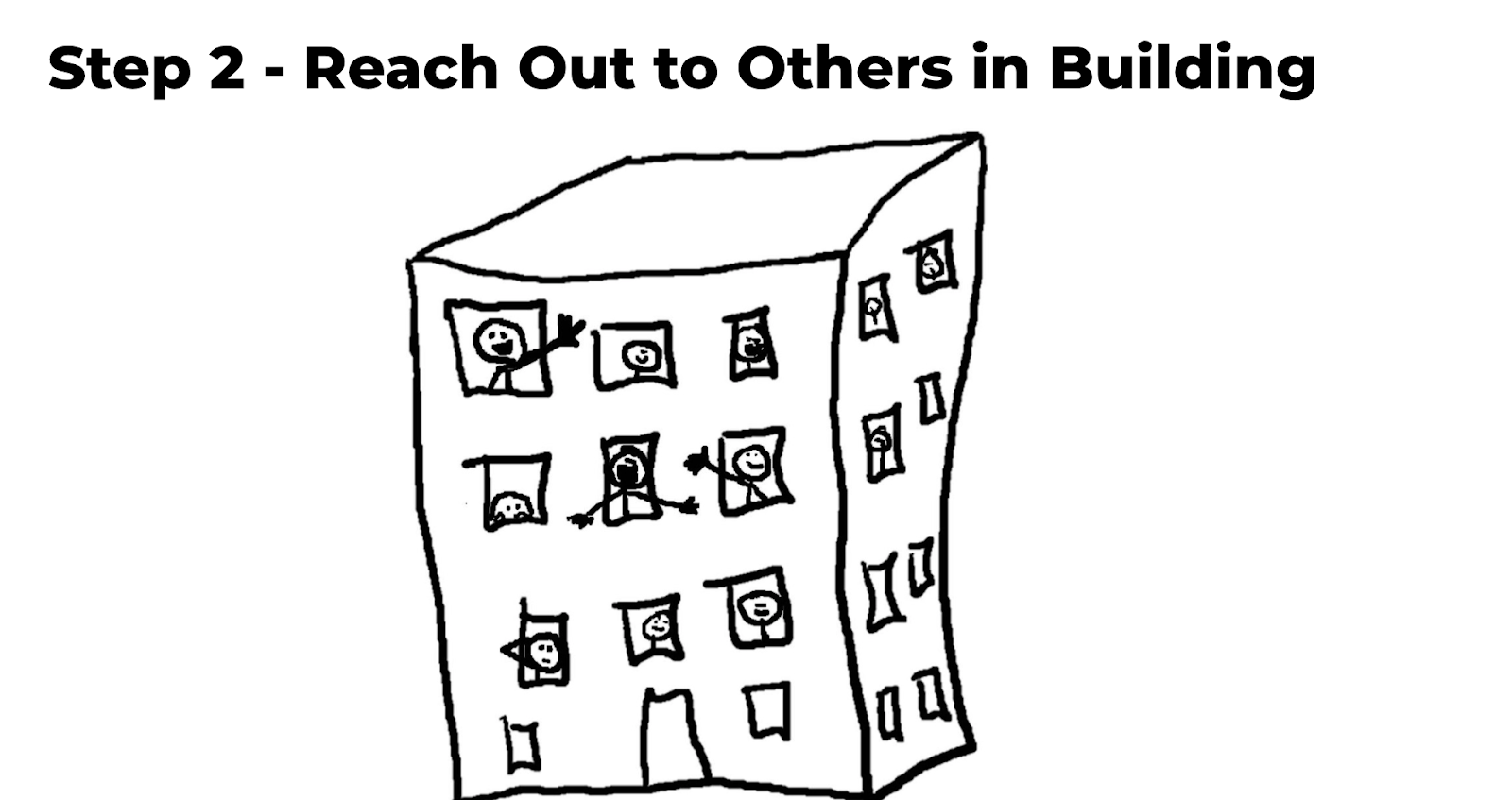 Set a time to go door to door knocking to connect with the other residents in your building. It’s really important to share with others why you are organizing and listen to their concerns. A good rule of organizing is to spend two-thirds of your time listening. Coop 789 was on the smaller side so they didn’t have to reach too far, but they did ask for help from their friends, family and community. Their efforts got them additional support and funds! More on that towards the end. 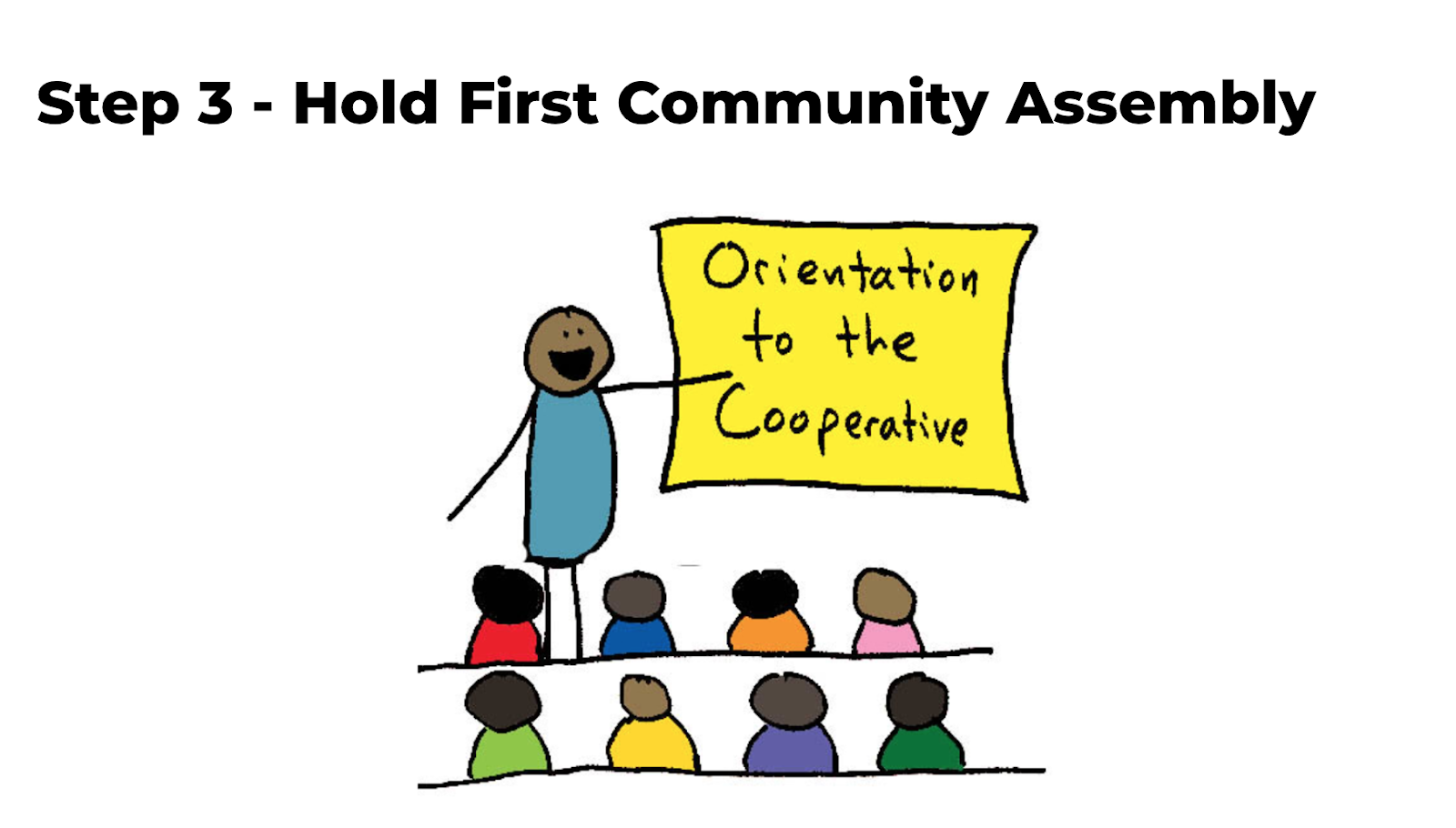 Many people call this a meeting instead of an assembly, but you should call it an assembly because it encourages tenant empowerment, participation, and decision making. It doesn't mean there has to be a huge turnout. Coop 789 organized themselves via text and a single in-person meeting. Again, this is a small example. In San Francisco, tenants are fighting one of the biggest most predatory slumlord real estate investors in the city, and are holding secret meetings on the roofs of their 50+ unit buildings.

Start with these 3 basic steps. TIP: Don’t get too caught up in technical details like by-laws or whether to incorporate as a 501C3. Focus more on good participation and growing participation. Take things one step at a time.

(Tenants Together has amazing resources! TT’s guide is super helpful and hits the nail on the head!)

Remember to keep an open mind! There are many wacky and creative ways to purchase your building. Coop 789 had to think outside of the box. You may be asking yourself, “Hope, why does organizing matter so much? I’m not really a people person and the concept of going through this hassle of herding cats doesn’t really appeal to me. Can’t I just flip a switch and get what I want?”. NO READER, NO! Take it one step at a time. Your end goal is to purchase your building. Keep in mind that purchasing property is expensive. YOU ARE GOING TO NEED HELP! You, more than likely, are going to pair up with a land trust/non-profit/HUD/Permanent Real Estate Cooperative/something or other. These organizations have the infrastructure to assist you on your journey to cooperative housing. They can even pick up the bill! If y’all have your stuff together, then it’ll make it 10 times more likely that any one of them will want to help.

The 789 building was being sold for 1.3 MILLION dollars. There was no way the tenants could afford that price so they turned to East Bay Permanent Real Estate Cooperative (EB PREC). An organization whose mission statement is to, “.... help facilitate BIPOC and allied communities to cooperatively organize, finance, purchase, occupy, and steward properties, taking them permanently off the speculative market, creating community controlled assets, and empowering our communities to cooperatively lead a just transition from an extractive capitalist system into one where communities are ecologically, emotionally, spiritually, culturally, and economically restorative and regenerative.”

EB PREC had never bought a property before. How did the tenants convince them to help? Take note!

The tenants made a document that described the tenants in the building: their names, occupations, and all of the ways they were rooted in the community. For example, one tenant is a special education teacher and another one co-founded a worker-owned cooperative cafe a few blocks away! After receiving the document from the residents, EB PREC went for it! EB PREC offered to purchase it outright from the owner, but he refused, possibly out of confusion. He was probably thinking, “What the heck? A community-driven coop wants to purchase this property?! What is happening!!”. The tenants even went as far as to offer to name it after him! “This could be a part of your legacy, we’ll name it after you: The Wright Gardens.” He put it on the market anyways, and EB PREC bought it through the realtor.

The residents of Coop 789 got even more creative and had a capital campaign where EB PREC raised 200,000 dollars from their community, family, and friends to rehabilitate the building! These funds were an investment (not a donation) and investors would get a return.

Now look at them! Beautiful. 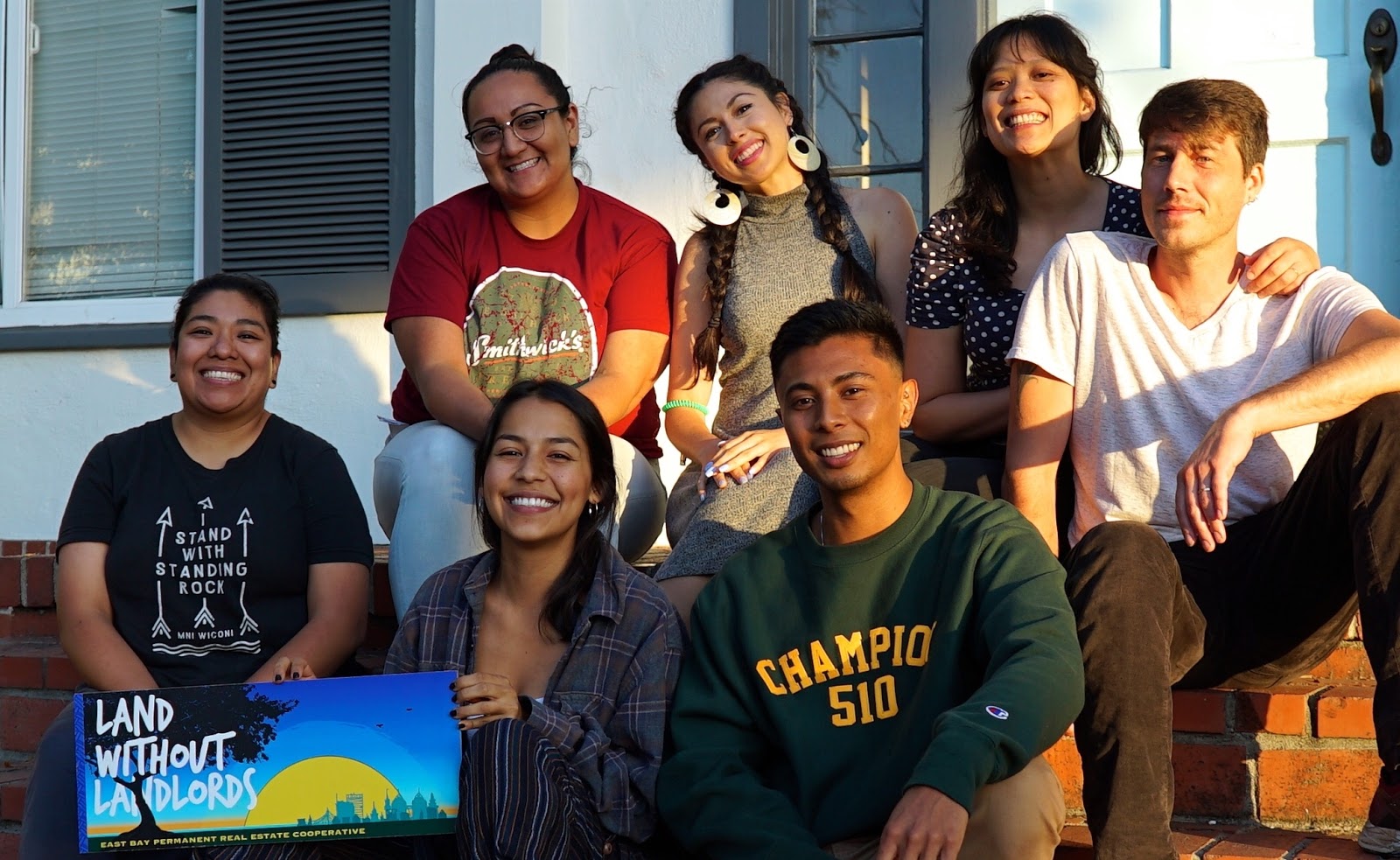 My final words of advice: Do your research, find other coops and talk to the residents! Vet the land trusts. Vet the non profit. Afterwards, consult with an attorney. Figure out which path to choose. IT’S COMPLICATED! So complicated that it’s always good to have an attorney advising tenants in the initial process of navigating the complicated world of tenant owned coops. A lawyer will help you see which way is up in this world of legal-ese, down right confusing world of coops, land trusts, non profit landmines, and liability. Legal experts can help you figure out what kind of control you are relinquishing, and also help draft letters of intent to set expectations that are not in fact legally binding. That’s just the tip of the iceberg!