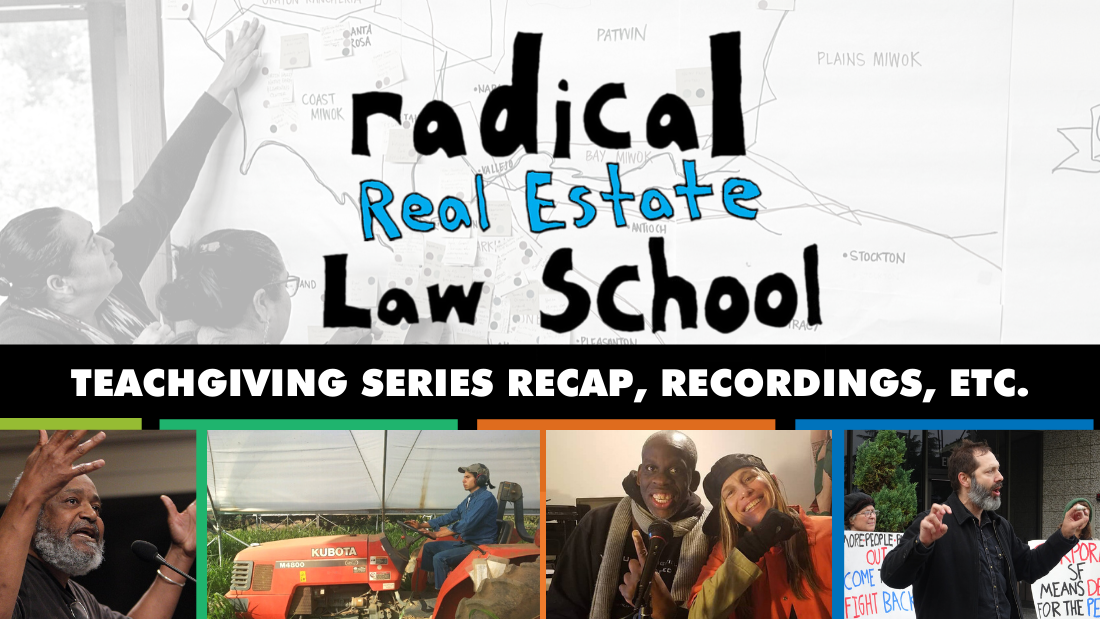 [If you missed Teachgiving, you can find the recordings here: Day One, Day Two, and Day Three]

In anticipation of the holiday season - inaugurated every year by a a festivity of abundance that simultaneously shrouds an incredibly violent legacy of genocide and dispossession - the Law Center took the opportunity to huddle the same questions we often ask ourselves every year. What narratives are we upholding, and in turn, what narratives are we obscuring? How do we reconcile the privileges that we have been afforded and so comfortably rejoice in while acknowledging that they are exclusive privileges not afforded to many? How do we normalize, and in fact center the conversations on the spectre of our privilege? What resulted was a series of events titled Teachgiving, focused on the faces of land liberation we don’t often see. This series was focused not only on what we take for granted, but even more important what is not always in our purview when we are navigating the world. And it is precisely  that fact which makes a lot of what we were able to offer seem radical, recognizing that radical is not inherently that which is most provocative, but instead that a provocation is a natural reaction of questioning the very foundations of how we have historically engaged with the land unquestionably.

One of the people that spearheaded this series was my co-worker Christine Hernandez — a person who stands firmly by her convictions that housing is a human right. But rather than have us lost in housing data, Christine offered us a vulnerable moment in her experience of adverse possession - the process acquiring legal ownership of land via  squatting. And the theme persisted throughout the series, where on Day 2, we had former Oakland City Council member Wilson Riles demonstrate to us how racially embedded perverse systems of land use continue to impede the ability for people Black and Indigenous communities to practice their cultures. On day 3, we had the incredible privilege of witnessing a fully embodied movement from POOR magazine - self proclaimed poverty scholars who never miss a chance to poetically remind us that their organizing is by and for the houseless and formerly houseless. Where some of us look to steer away from the adversity we have experienced, POOR magazine leans into it so that our discomfort in sitting with that reality informs our work and offers solutions for the most bereaved.

What made these discussions so engaging however, was putting those very deep and personal stories within a larger historical backdrop. This was achieved by creating context throughout the presentation as well. Land use attorney Christopher Chou took the time to expound how the professions that have formed through a formalized planning process exist awkwardly. While they have shifted from a process of regulating nuisances often coded racially, into new aspirations to create more vibrant and efficient cities, they have remained incapable of shedding their foundations in racial capitalism. Community organizer Steven DiCaprio winded way back into history before the common era to challenge the stigma behind adverse possession and expound how the state encoded this for collection of fees and provisions for the state since the days of Babylon. And POOR Magazine, in a beautifully circular fashion spoke of their aspirations for unselling the land. Rather than striving to shift power to then ensure liberation, POOR Magazine does away with the springboard of land trusts and declares that their only intention is to buy to unsell the land. Rather than call their project a land trust, POOR Magazine resorts to using liberation-of-land trusts, where your relationship to the land is fully acquired through your sweat equity.

The three part series was well received, having well over 100 participants throughout the course of three days. The events were met with gratitude in being able to recognize faces, that although not new, have not been a point of consideration for those looking to reimagine our relationship with the land. And this was precisely the intent of the law center. In order to come into new domains of thinking, we must continually question the avenues that bring us here. Teachgiving was a success largely because privileged and well resourced people were able to sit with discomforting realities, which are everyday occurrences for others. But what stood out from this event most wasn’t the challenges, but rather the creative persistence of our participants to reimagine the land.