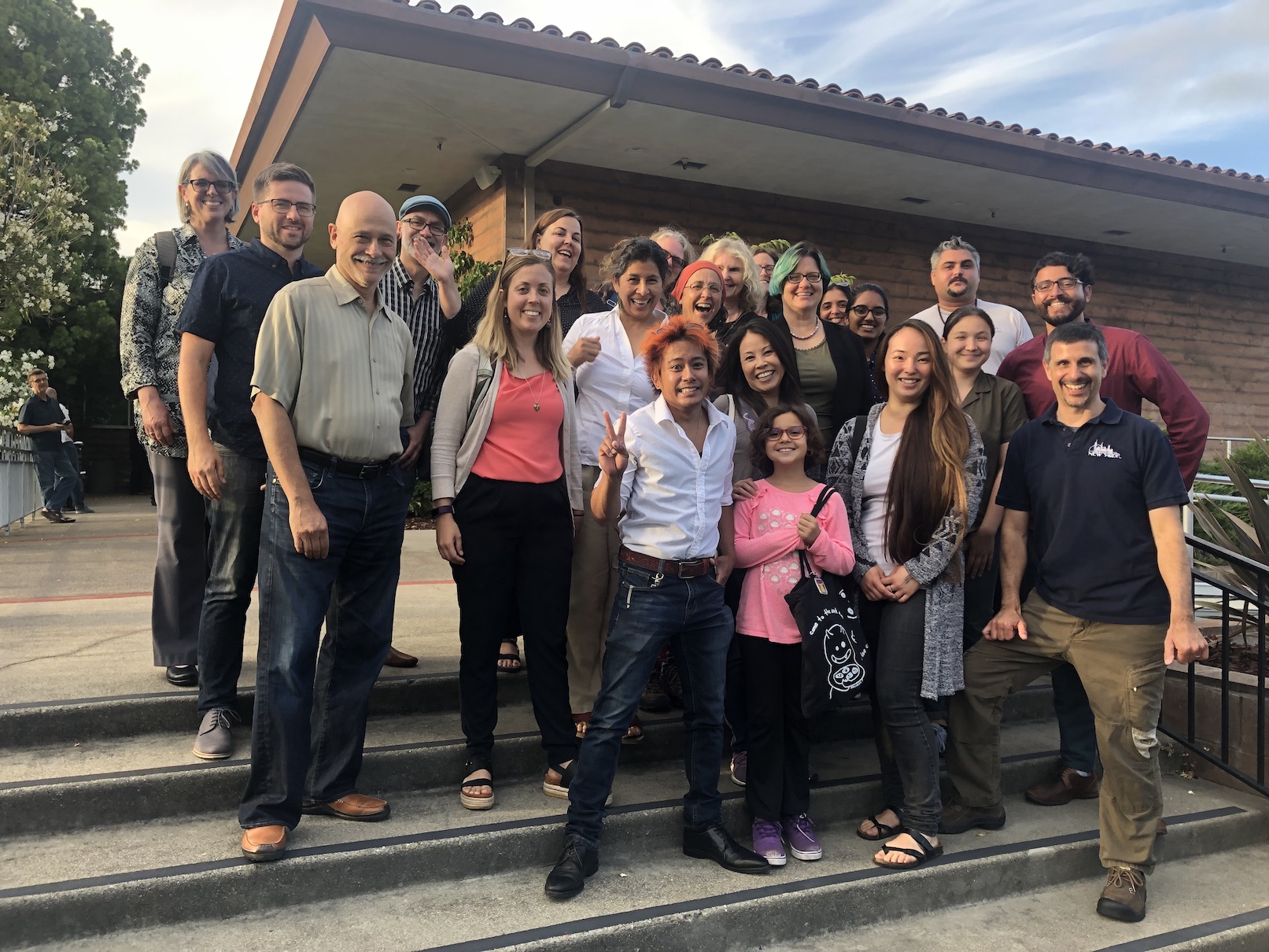 On Tuesday night, over fifty coop members and supporters from all over the Bay Area gathered for a learning session requested by the Santa Clara City Council who later unanimously voted to support the development of worker cooperatives in their city! It was standing room only in the council chambers as a result of Kirk and Marguerite Vartan’s dedication and energy to get this session on the council’s agenda as well as partner and support organizations from across the South Bay. Kirk Vartan is the Founder and General Manager of A Slice of New York, a pizza shop that converted to a worker-owned coop nearly two years ago. Vartan created an impressive and engaging line up of speakers including Hillary Abell of Project Equity, our own Ricardo Samir Nuñez, Sue Lopez, a baker of 19 years from the Arizmendi Bakeries, and Rendell (Ren) Boguiren, a founding member and the board secretary of A Slice of New York pizzeria.

The guest speakers oriented the council to what worker cooperatives are and why they are essential at this point in history given the ever changing economy, and what it is like to work in a cooperative. Hillary Abell shared that nearly 1 out of every 6 employees are employed by baby boomers who will retire in the next 15 years. She made the case that our cities must support these business owners to develop succession plans in order to maintain jobs and develop the small business sector. Cooperative ownership is a great succession plan!

Ricardo Nuñez shared about how the City of Berkeley recently passed policy recommendations to create more infrastructure to support businesses transitioning to coops and to incubate new worker cooperatives. With confidence he shared how the cooperative movement had been supporting Berkeley for years to get to this moment and was ready to support Santa Clara to do the same. 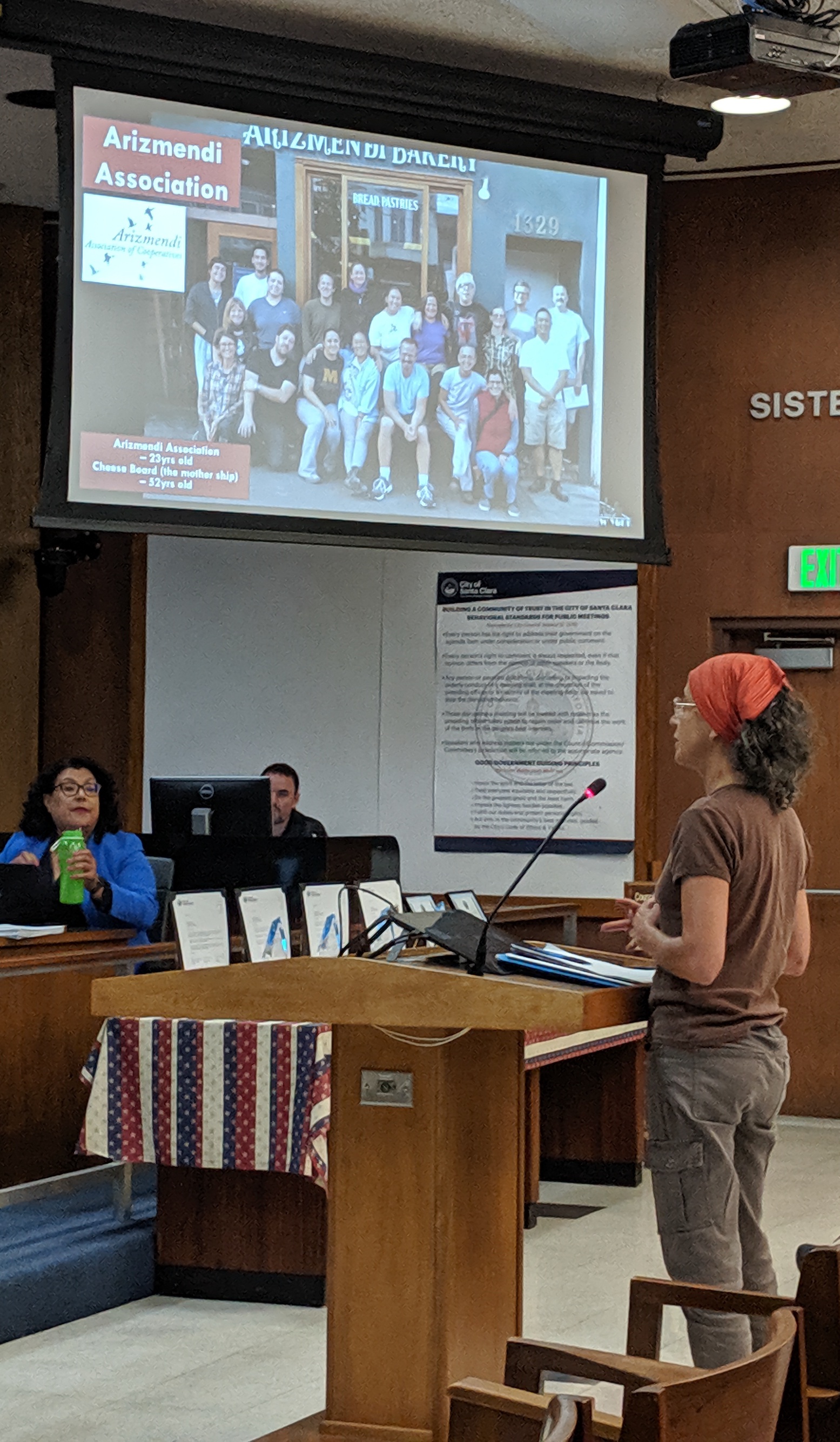 Not only did we hear inspiring visions from  cooperative developers, we heard from coop owners, themselves. Sue Lopez described working in a bakery for nearly two decades as an anomaly. When can people stay in the food industry for decades? When they work for coops that value their labor! She described working in an  environment with dedicated staff, where employee owners were empowered to create the organization and careers they wanted. She also tipped us off about getting 7 weeks of paid vacation each year. Ren Boguiren talked about working at a pizza shop for 8 years (also unheard of)  and how he and his fellow worker-owners were able to develop business skills and leadership as they learned new roles in the business--no matter what age they are. Both Sue and Ren shared about how their jobs were more than just a job but gave them meaning and satisfaction.

When Vartan returned to the microphone he asked that the City Council to direct the City Manager to study options for the city to implement education, outreach, technical assistance, and a loan fund for cooperatives. The Council was amazed by the presentation! They were excited to get involved with the cooperative community and make the process of becoming a cooperative business smooth and simple for Santa Clara business owners. Councilmember Debi Davis motioned to pass the request for the City to get engaged through the Economic Development, Communications, and Marketing Committee to evaluate the budget and staff time needed for this project, to work with the Silicon Valley Chamber of Commerce to identify the businesses that would need support transitioning, and to develop outreach and educational materials to support businesses who want to become cooperatives. Vice-Mayor Patricia Mahan said she did not want to create a study to answer the question of “whether or not [coops] work, we know they do, but about what the city can do to make them work.”  Mayor Lisa Gilmor emphatically supported the presentation and added that she knew financial support was a major piece in ensuring business transitions to cooperatives were smooth and accessible.

The Law Center is incredibly excited that the City of Santa Clara is joining the vanguard of municipalities around the country that sees worker cooperatives as an essential component of economic development without displacement. We know that our partners in the South Bay and across the country, including A Slice of New York, Human Agenda, TeamWorks, the US Federation of Worker Cooperatives, Project Equity, the Democracy at Work Institute, and so many more are in this for the long term as we build a future of labor that is just, equitable, and democratic.

Why not sign up or update your email preferences regarding worker coops and democratic workplaces here! 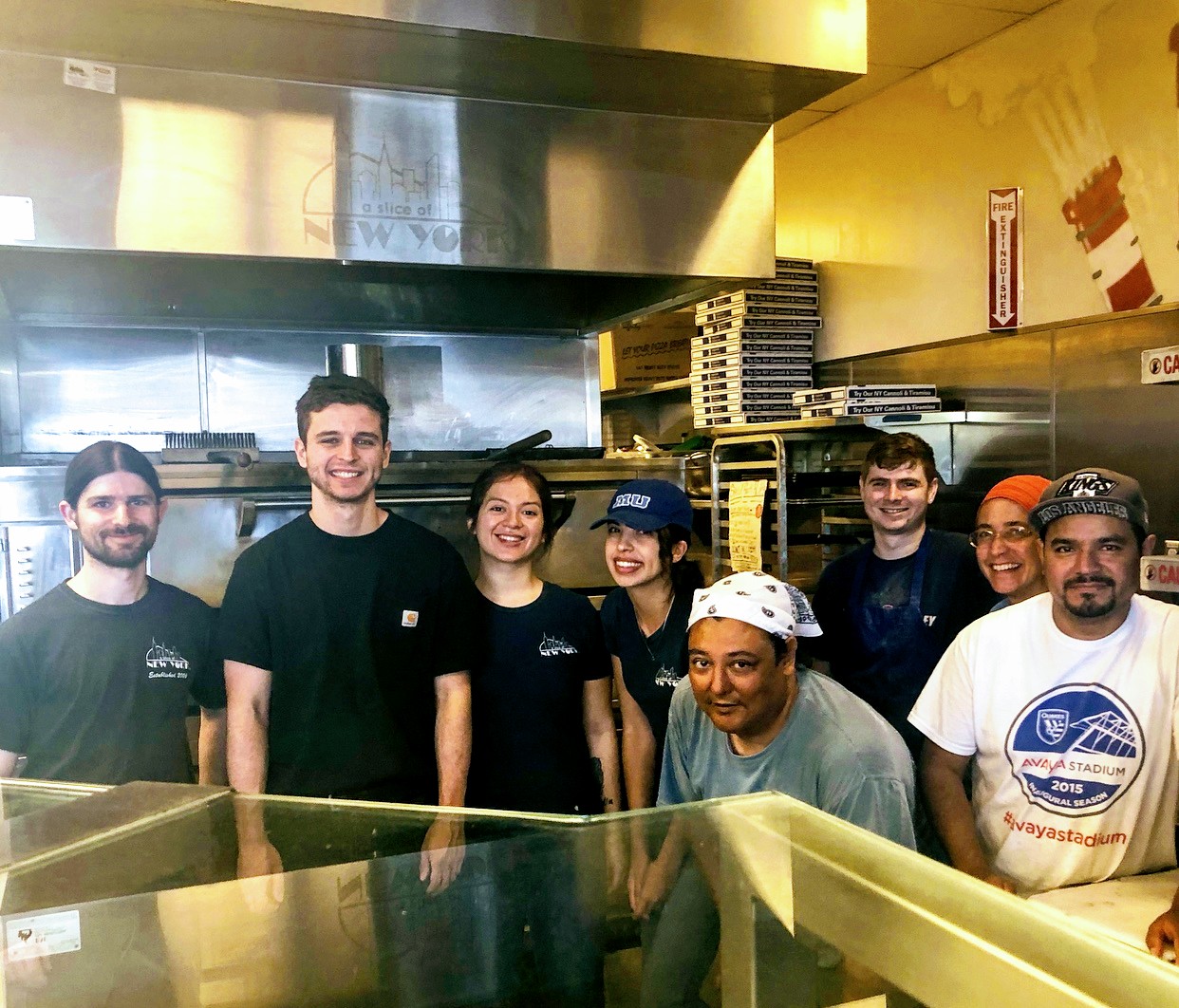