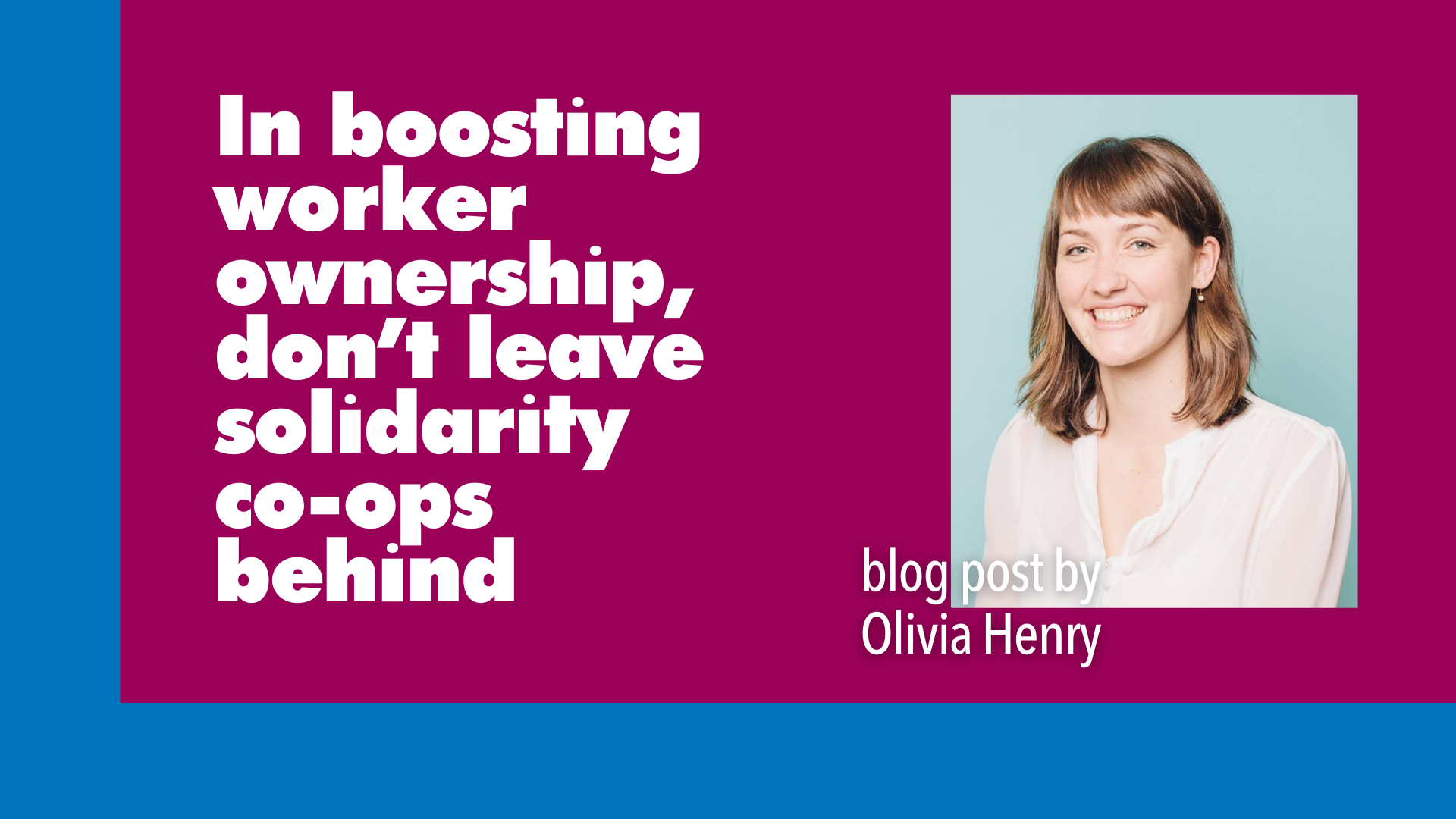 Worker-ownership has emerged as an important strategy to keep people employed, doors open and communities served in the midst of COVID-19. A Rutgers study found that majority employee-owned companies outperformed traditional businesses in job retention, pay, benefits and workplace safety during the pandemic. Local and state governments are developing policies and funds to support this movement: New York City opened an employee-ownership hotline in December 2020 and the City of Santa Clara launched a Worker Cooperative Initiative in January of this year. As of 2019, the Berkeley Revolving Loan Fund can be used to finance worker cooperative conversions, has removed barriers to co-op access and has a minimum 10% lending target worker cooperatives or businesses converting to democratic worker ownership.

As these support programs for worker ownership grow, let’s be sure to include multi-stakeholder co-ops with strong worker-owner classes.

In the journalism sector, several cooperatives are emerging or converting with multiple kinds of owners, not just workers. That’s the case at Means TV, where full-time employees share profits with contractor members and royalty members. The Devil Strip in Akron, Ohio has a member class for people who contribute or volunteer for the magazine and another member class for readers. In Baltimore, Bloc by Block platform cooperative plans to include local newsrooms as stakeholders along with community members. In California, The Mendocino Voice and SF Bay View newsrooms are both in the process of converting to hybrid cooperatives with potential worker, reader and community member classes.

Full employee ownership is rare in journalism. Scholars like Fred Felder, Robert Pennington and Nathan Schneider have documented why employee stock ownership plans — a form of employee ownership — grew and then mostly disappeared in the U.S. journalism industry in the past several decades; the reasons seem to be connected to bigger struggles the industry faces around technological change and commercial business models. A handful of newspapers such as the Daily Herald Media Group in Chicago, Dubuque Telegraph and Cedar Rapids Gazette remain majority-owned by ESOPs. Defector Media, made up of former Gawker staff, became employee-owned in 2020. Several media production companies such as Meerkat Media, Bonfire Media Co-op and Clickhole are also worker-owned.

Yet multi-stakeholder cooperative models — also known as solidarity co-ops — are becoming increasingly popular. People Power Solar Cooperative, East Bay Permanent Real Estate Cooperative and Ampled are examples of recently organized multi-stakeholder co-ops. In a 2011 report, Margaret Lund writes that solidarity co-ops emerge where it’s necessary for potentially antagonistic classes to work together to meet a common goal. Take the example of a local newspaper, where the economic motives of employees, freelancers, advertisers and readers may not appear aligned. Yet a shared commitment to the paper’s services and its financial success could serve as the basis for blended ownership. Moreover, a class of reader-owners can reflect the reciprocal relationship between newsrooms and communities, which is more dynamic than that of vendor and customer. This model doesn’t necessarily diminish workers’ power, either: full-time employees at Means TV are the only class that can sit on the board of directors. In Dominion Media Co-op, managing editors control the majority of board seats and have an outsized role in reaching quorum for voting.

Can these hybrid co-ops — especially those with strong worker-owner classes — participate in government funded opportunities for worker cooperatives? Many programs and policies do not precisely define worker cooperatives, instead leaning on broad language about worker ownership and democratic governance: for example, the Worker-Owned Recovery California (WORC) policy agenda defines worker cooperatives as “businesses owned and controlled by the worker-owners, who share in profits and elect and serve on the Board of Directors."

(A)to which part I of subchapter T applies,

(C)a majority of the voting stock of which is owned by members,

(D)a majority of the board of directors of which is elected by the members on the basis of 1 person 1 vote, and

(iii)some combination of clauses (i) and (ii).

This standard is slightly flexible in its language around majorities of membership, voting stock, board seats and dividends belonging to employees. Yet many hybrid co-ops have numerically larger non-worker classes, and these classes take hybrid co-ops outside the scope of 26 U.S. Code Section 1042(B). The Democracy at Work Institute proposes a more spacious definition of worker cooperatives:

1. The term “Worker Cooperative” means any enterprise that meets all of the following criteria:

2. The enterprise is a business entity with one or more classes of membership

3. All workers who are willing to accept the responsibilities of membership and who meet member eligibility criteria are eligible to become worker-owners

4. A majority of allocated earnings and losses are allocated to worker-owners on the basis of patronage

5. The class of worker-owners has a controlling ownership interest

6. A majority of the Board of Directors or governing body is elected by the worker-owners on the basis of one-member-one-vote

7. Decisions about return on capital investment are made by the worker-owner class or by the Board

This standard still privileges workers as the controlling member class, but contains no restrictions regarding the relative size of member classes. This small tweak could open the door to more solidarity co-ops benefitting from worker-owner programs.

For now this discussion is hypothetical: most multi-stakeholder cooperatives operating in the U.S. do not give workers the kind of control required by the DAWI definition. For example, worker- and consumer-owners of Weaver Street Market in North Carolina pick an equal number of board seats and patronage is distributed among all owners. At Ampled — a music streaming platform with worker-, artist- and community-owners — 85 percent of dividends go to artists and 15 percent goes to workers. Moreover it’s unclear if any multi-stakeholder co-ops with strong member-owner clases have been excluded from existing worker-ownership benefits and programs.

The big picture is that we need more local, state and federal policies that encourage worker ownership. Public education and lawmaker education is key to making that happen. The Sustainable Economies Law Center is doing that work at the state level through the WORC Coalition and at the city level with local campaigns and model resolutions  – as well as through its webinars, reports and cartoons. Tweaking how worker ownership is defined in statutes, regulations and ordinances is a secondary concern but one that will benefit organizations like those in journalism who organize across groups in solidarity.

Olivia (she/her/hers) is a master’s student at the University of California, Davis studying public subsidies for cooperative news organizations. She recently served as a graduate intern for the Sustainable Economies Law Center, University of California Cooperative Extension and The Mendocino Voice. Olivia previously worked as a consultant for The Listening Post Collective in support of community information projects in California’s Central Valley. She’s also served in communications, outreach and community engagement roles with the USC Annenberg Center for Health Journalism, KALW Public Radio, San Francisco Public Press, the Institute for Nonprofit News and Mother Jones.