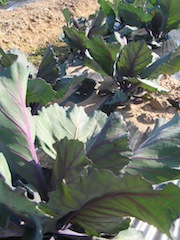 About 1300 refugee Hmong, Mien, and Lao farm families have been working in Fresno since 1976. The majority of these farmers work on small plots of land ranging between 1-10 acres, where household members perform most of the day-to-day work. Most of these farming families have a semi-subsistent lifestyle – growing food for themselves and their community, and selling enough vegetables to earn a modest income usually equivalent to less than minimum wage.

Many of the crops they grow have special labor requirements. Green beans, for example, generally cannot be mechanically harvested. They must be harvested by hand within one or two days of harvesting time. A family from one farm is likely to show up on a friend’s farm to help out, and vice versa. There is a culture of reciprocity, lending a hand here and there, because it means receiving a hand when needed.

In 2004, farmers in this community started to receive government citations with expensive fines because of these reciprocal practices. Under the labor laws, anyone helping in the fields generally must be treated as an employee. Therefore, each farm must provide workers compensation to the other neighboring farmers who perform such favors for them during the harvest season. For example, the California Division of Workers Compensation (DWC) imposes a $1500 per worker fine for failure to provide workers compensation. However, given that the cost of workers’ compensation insurance can run between $.50 and $2.00 per hour for a farm worker, and given that it’s hard to get a policy for less than three months, carrying such insurance is impossible for a farmer that only needs outside help a few days per season.  Since the farmers earn a very small monetary income, asking them to jump through such legal hoops and the cost of the citations has driven some farmers to stop farming altogether.

The California Division of Labor Standards Enforcement (DLSE) regularly shows up and issues citations when they see groups of people working in a field. Language and cultural differences between farmers and regulators further complicate these citations.

Because they are semi-subsistence farmers, another difficulty that the farmers face is demonstrating a distinction between the work of growing food for sale and for personal consumption.  Generally, if family members all work together in a garden to grow food for themselves, they are not seen as employees.  However, the fact that the farmers also grow food for sale means that an assumption of employment exists any time people are working in the field.  For example, one farmer was fined $1000 for not providing workers compensation insurance to his live-in uncle.  When the Department of Industrial Relations (DIR) visited the farm, the uncle was helping out in the garden, tending to food that the family planned to eat.  On appeal the farmer was unsuccessful in persuading the DIR commissioner that the uncle was not working for the enterprise.

These stories reflect a tension between agricultural employment regulation and small-scale, collaborative farming. The rigidity of these regulations is hurting, rather than supporting, small-scale farmers. 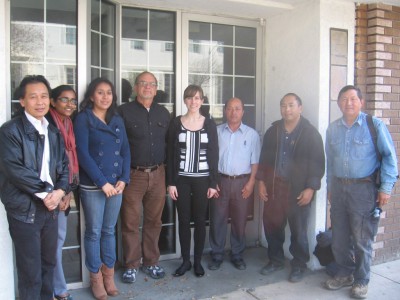 The Sustainable Economies Law Center (SELC) has a short-term objective to educate farmers on relevant employment and labor law issues and provide tools and solutions to address these legal issues. Our longer-term objective is to facilitate a regulatory shift that will allow small family farms to meet their labor needs in economically feasible, practical, and collaborative ways.

In July 2011, our Executive Director Janelle Orsi and law student interns Karan Dhadialla, Kelly Densmore, and Tony LoPresti travelled to Fresno to hold legal advice clinic sessions for local farmers.  The day started with an introductory conversation with local attorneys, advocates, and community members who have been working with the Hmong, Mien, and Lao farmers. Attending were: Richard Molinar, UC Cooperative Extension Small Farms Specialist; Toulu Thao, a longtime Hmong community advocate who works for HUD; Chukou Thao, head of the National Hmong Farmers Association (NHFA); Annette Hiatt, a North Carolina lawyer who is involved in the NHFA; Michael Yang, who works at UC Cooperative Extension and provided translation services; and Harold Chuhlantseff, an insurance broker who specializes in workers’ compensation and is a friend of the Hmong community.

After a two-hour discussion, SELC staff and interns held clinic sessions for eight farmers. They were joined by Ana de Alba, a Fresno labor law attorney and UC Berkeley Law (Boalt Hall) alum. Some farmers at the clinic had already received citations from OSHA, DLSE, or DIR and needed assistance with appeals. Others had not received citations but wanted to make sure they were complying with the law.

Since the July 2011 clinic, SELC is developing legal resources and training materials for widespread distribution. SELC has been working with farmers, community activists, advocates, and UC Berkeley’s Students for Economic and Environmental Justice (SEEJ) to ensure that the resources are easy to use, culturally and linguistically accessible, and specific to the needs of small family farms. These resources include:

Contingent on additional funding, we also hope to provide a one-stop-shop workshop where refugee farmers would receive binders with all the required documentation on compliance. Farmers would rotate from station to station to learn about the requirements and to fill out their documents. If inspected, farmers would have a binder ready which they can show to inspectors evidencing their compliance.

SELC and SEEJ are also helping to share the stories of farmers affected by these regulations, and to expose how regulations are undermining the collaborative efforts of people that farm together.

Finally, we will develop a policy advocacy platform that facilitates collaborative/reciprocal farming practices.

We served eight refugee farmers at the July 2011 legal clinic. We have developed relationships with Fresno attorneys, farmers, activists, and advocates with knowledge, skills, and capacities that complement our own. As helpers from outside the Fresno community, SELC recognizes that the success of the Refugee Farmer Project requires that we work closely with those in the Fresno community because they have skills, capacities, and expertise about their own communities, which SELC does not have. Richard Molinar of UC Cooperative Extension is reaching out to San Joaquin School of Law and other regional institutions that might be able to provide support.

Continuing this work to meet our longer-term objectives as described above is contingent on additional funding.

Translation problems are huge: In many cases, citations are issued to small farmers for non-existent violations.  Because the refugee farmers cannot communicate with the inspectors and do not understand their requests, the inspectors assume there is a violation and cite them.  For instance, in one case, a farmer thought the inspector was asking for a cup of water when the inspector was in fact asking to see the farmer’s water provisions for his workers. Further, there is a widespread lack of education about standards and requirements and only a small percentage of these farmers understand how to comply.

Very low compliance rates: Our contacts estimate that about 80% of the refugee farmers do not have workers’ compensation insurance and are vulnerable to hefty fines. While most are not aware that it is required, others do know but are unable to afford the premiums.

Adversarial relationships with enforcement agencies and inspectors: There is no love lost between the Hmong/Mien/Lao communities and the enforcement agencies. These farming communities feel unfairly and disproportionately targeted. They feel that the agencies and inspectors lack integrity and take advantage of the low education level amongst the refugee farmers. They have approached leadership, but have not made progress in building a positive relationship. There has been almost no outreach to the refugee community. There has also been a complete lack of cultural sensitivity. For instance, on more than one occasion, the agencies sent Chinese translators to work with the refugee farmers and then claimed that they had provided a translator “that looked Asian.”

Refugee farmers are easy targets: One of the reasons why there has been so much enforcement against refugee farmers is that they are easy to locate on the land. Whereas it can be difficult to locate an individual on a 500 acre plot, farmers are readily accessible on a 5 acre plot. Further, because they do not speak the language and do not have representation, inspectors often write up a citation and explain to the farmers that they can appeal it and show evidence at the time of appeal to abate the penalty.  Because the farmers do not have the resources or understanding of the process, however, they often fail to file a timely appeal or just pay the fine. Most of the time, the inspectors do not issue a citation on site, but send it in the mail after the inspection.

Inspector education is not culturally appropriate: In the rare cases where inspectors have attempted to educate the farmers about compliance, the farmers have walked away more confused. The inspectors use lingo that is difficult to understand. Farmers with very limited formal education, often illiterate, cannot track the conversation.