Last fall, Policy Advocates for Sustainable Economies (Policy Advocates) awarded Cooperative 4 the Community (C4C) a $15,000 contract to support their campaign for participatory budgeting in Oakland. C4C, an Oakland-based cooperative focused on supporting local activists and increasing civic engagement, was founded by Olivia Morgan, Chris Chew, and Kyle Donnelly. The goal of the Participatory Budgeting campaign was to amend the Oakland City Charter in order to enable citizens to directly shape the city budget with their vote. In order for the measure to make it onto the 2020 ballot, its proponents needed to collect signatures from 10% of eligible Oakland voters.

With the support of funding from Policy Advocates, C4C successfully gathered over 19,000 signatures. C4C also worked alongside The Community Democracy Project (CDP), an all-volunteer group that started the participatory budgeting campaign to meet the ballot initiative requirements. 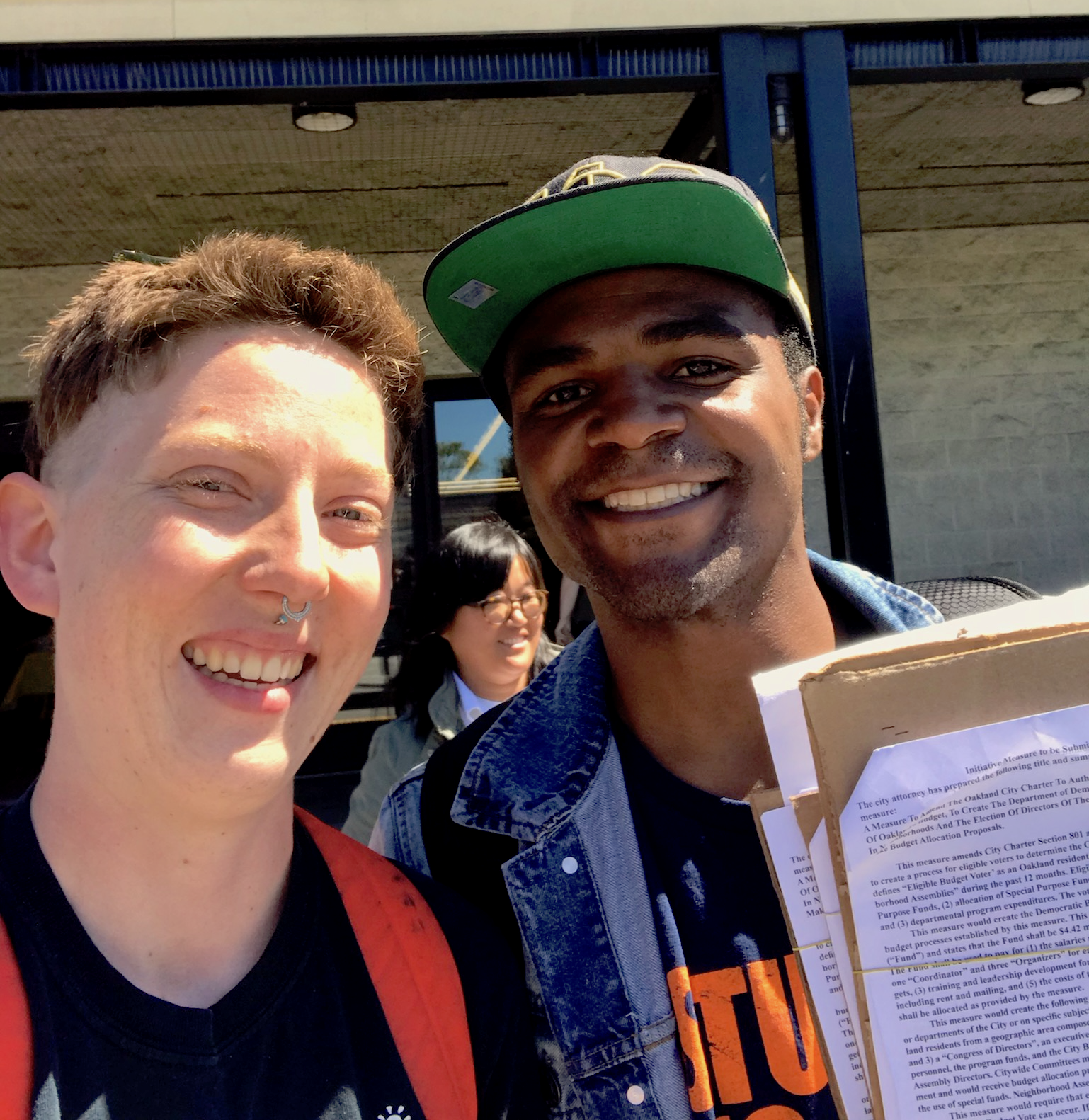 C4C described the funding from Policy Advocates as essential to its signature-gathering campaign. With the increased funds from Policy Advocates, C4C was able to open more shifts, in particular during weekday afternoons. This was “an important focus as volunteers faced earlier sunsets, rain, and saturation during rush hour,” the C4C founders explained in a joint statement. “C4C used the Policy Advocates funds to pay for shifts spent towards preparing for submission to the City; these shifts focused on tasks like signature validation, counting signatures, and checking for damaged sheets.”

Both C4C and Policy Advocates for Sustainable Economies are committed to creating opportunities that foster democracy in the workplace as well as in civic space. Donnelly noted that the Participatory Budgeting campaign closely aligns with C4C’s Mission and Points of Unity.

“The People’s Budget charter amendment creates a new avenue for civic engagement that is designed to include all Oakland residents; an opportunity for folks who may not consider themselves ‘organizers’ or ‘activists’ to be involved and make a direct impact in their community,” stated C4C members. “We are proud to help make this vision a reality.”

C4C’s Mission and Points of Unity can be found in their Bylaws at www.cooperative4thecommunity.com/bylaws.

Next Steps for C4C

Early in January, the Oakland City Clerk’s Office completed the prima facie count of the Participatory Budgeting Campaign’s signatures. Ultimately, the City Clerk’s office determined that the minimum number of required signatures had not been met. Despite this outcome, C4C remains a hopeful stance on the progress that has been made. Yesterday, they participated in a public forum and invited Oakland residents to join them for a teach-in at Tamarack Bar in downtown Oakland. During this candid discussion, both C4C and the Community Democracy Project talked about both what went wrong and what went right in the campaign.

Policy Advocates is currently looking for Board Members. The commitment would be 2-6 hours every quarter. We are seeking individuals who share our vision for creating a new, more democratic and community-led economies. If you are interested in applying to become a Board Member for Policy Advocates, please send a resume to [email protected]