PG&E’s Profit Grab: At War Against the People 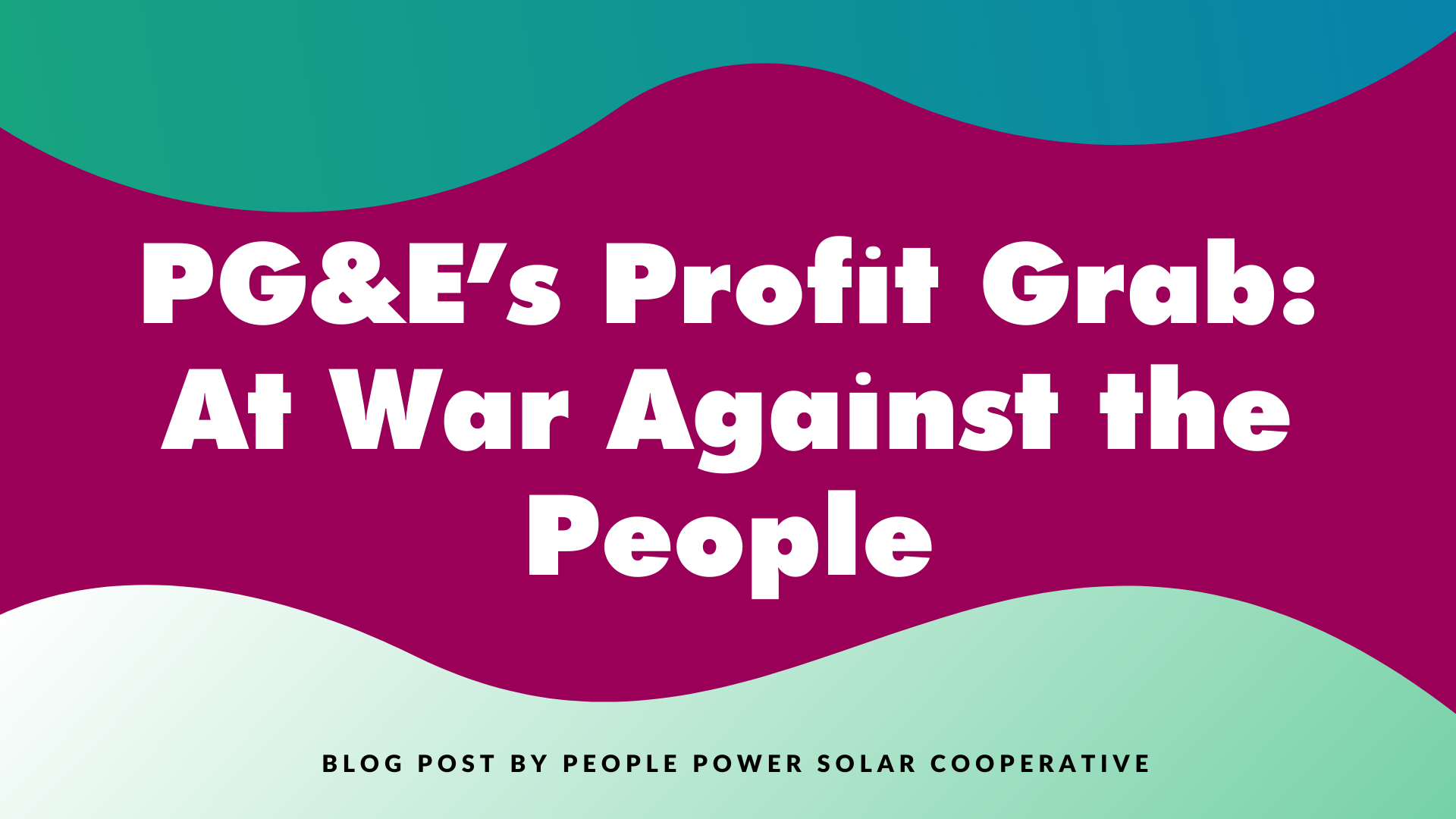 California's investor-owned utilities are opening up a new front in their power grabbing war against California's energy utility customers -- and that means you.

In California, profits for these investor-owned utility (IOU) monopolies like PG&E are not determined by how much energy they sell, but by how much they invest in infrastructure (transmission lines, etc.). Their return on these investments is guaranteed by state regulators. It’s no secret that every year, IOUs spend millions of their customers’ money to lobby policymakers in Sacramento to increase energy rates for customers and line the pockets of their shareholders. That’s their business model, and it’s been working out well for them, until now.

The Threat of a Better System

Today, IOUs’ lucrative business model is being threatened by Californians’ ability to build their own energy infrastructure, thanks in most part to rooftop solar. The more Californians can produce their own energy, and the less dependent we are on massive energy production projects situated hundreds of miles from customers, the less PG&E and other IOUs can justify building unnecessary grid infrastructure and charging ratepayers top dollar for it.

There is a good reason for communities in California to want rooftop solar. In the wake of events like the California wildfires, Hurricane Maria, and Standing Rock, communities across the country are seeing the value in stewarding their own energy future. “Energy Democracy” is the fight of working people, low-income communities, and communities of color to wrest control of energy from the centralized, unaccountable corporate establishment and place it in the hands of their communities.

The result is decentralized and decommodified energy models democratically controlled by the community, creating jobs, clean air, energy justice, fair wages, and community resilience. In sunny states like California with large urban areas, rooftop solar is an essential tool to build local, clean energy and the current IOU power play to stall rooftop solar will set us back by decades.

The IOUs are threatened by expansive growth of rooftop solar because it challenges the fundamentals of their lucrative business model.

That said, the implementation of California’s rooftop solar policies to date has been less than equitable. Private companies like Tesla currently dominate the residential rooftop industry in California, marketing their product as a luxury good to property owners while leaving renters and low-income working class communities (more than half of the state) behind.

With this, “rooftop solar” has become an easy target for the IOUs. They exploit tensions around labor and racial justice to rob all Californians of the benefits of renewable energy. The IOUs have fabricated a manipulative “cost shift” narrative that says rooftop solar is shifting costs onto low-income communities. This narrative is based on cherry-picked -- and misleading -- data and methodologies [1]. IOU strategists have been guided by the following approach: 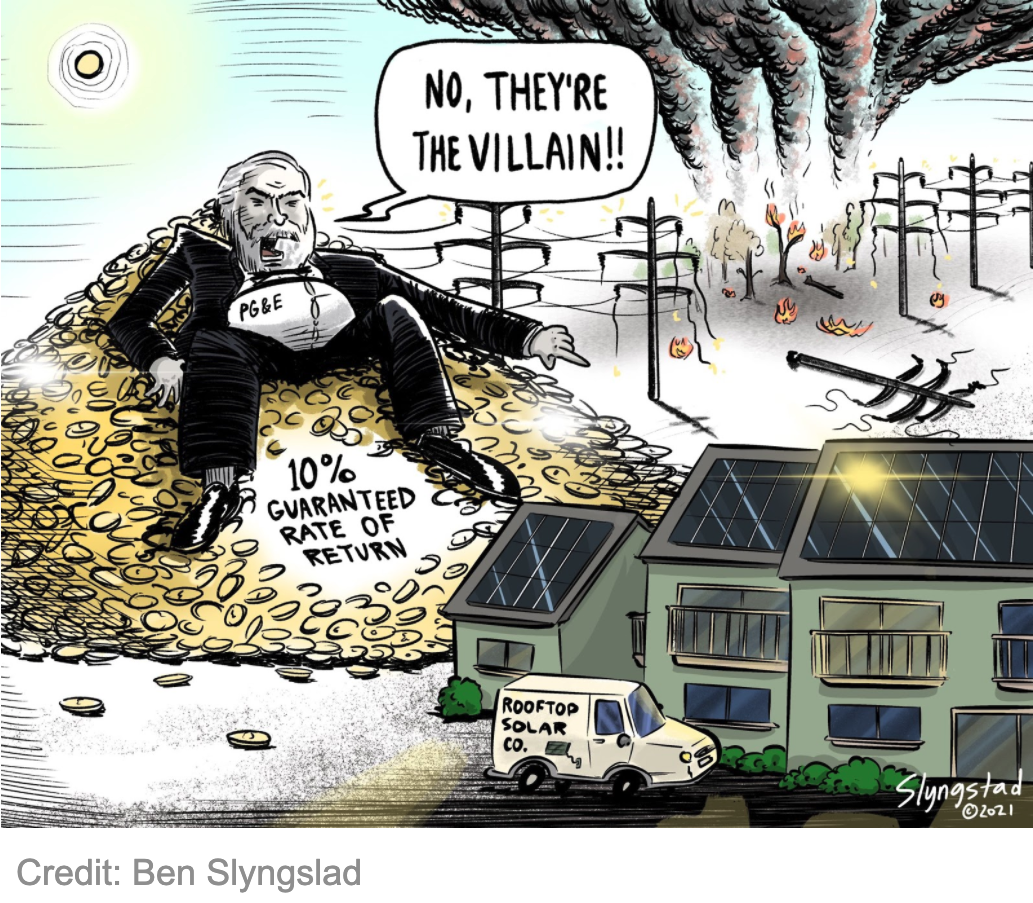 “The only way to stop the [investor-owned utilities] death spiral, is to kill, or drastically weaken, solar. If exploiting the race and inequity wedge is the pathway to do so, so be it.” [2]

The Fight Over California Rooftop Solar

Lobbyists for PG&E, SDG&E and SoCal Edison are leading an aggressive and well financed campaign to convince Sacramento policymakers that rooftop solar is the reason why energy bills are skyrocketing. AB 1139 will shift money from current and future solar customers and put it into the pockets of IOU shareholders. AB 1139 is manifestly a “Utility Profit Grab” bill (fact sheet here).

If the IOUs win this fight, solar installations will drop precipitously starting in 2023. Rooftop solar will become financially inaccessible to working families, including low-income customers, eliminating local solar companies and jobs due to lack of demand for rooftop solar. It will also set back our collective ability to address the climate crisis through locally-controlled, decentralized energy systems and projects like microgrid-based resilience hubs.

Meanwhile, energy bills will continue to increase due to increasing rates to pay for wildfires, power outages (and the long-distance transmission lines that cause them), as well as the recent $7.5 billion PG&E bailout.

For the safety, health, and well-being of our communities, we need to unite to fight for rooftop solar with a vision based in Energy Democracy, and not the flawed, extractive model of the private solar industry that so often plays right into Utilities’ hands. We need to put forth a new energy paradigm that focuses on decentralized energy technology and policy (like rooftop solar and community-owned solar, storage, and microgrids) that is decommodified and democratically controlled by the community.

This means prioritizing community-owned renewable energy projects developed by cooperatives, municipalities, and nonprofits that build wealth and decision-making power for BIPOC communities and others who have been historically divested from the fossil fuel economy. We need a common sense proposal for a public takeover of IOUs and a fully reimagined energy utility system based on 21st-century grid realities and community needs, with any money made reinvested back into the grid or the larger community rather than shelled out to shareholders.

About the Author - People Power Solar Cooperative: A Movement Cooperative for Energy Justice in California

Interested in protecting community power to build energy justice in this fight? People Power Solar Cooperative is a movement cooperative that aims to change the face of energy ownership in America for the grassroots empowerment of communities. Our member-owners are Californians who are frustrated with our current energy system, mostly renters, low income homeowners, and homeowners with shaded roofs who cannot otherwise own a piece of our energy transition. We’ve developed training materials and provide technical assistance to our members and their communities to organize, identify sites, and raise capital for community-owned energy installations that build wealth and resilience. Yes, communities can take back control of power – literally, financially, and politically.

If you’re tired of the same old game or feel helpless, join us and let’s build People Power together! Get involved and we will keep you posted on this critical fight with ways to stay engaged.

[1]  This is a very common tactic laid out in the Utility Industry’s Disinformation Playbook used by IOUs all over the country to lie, cheat, and steal from communities.