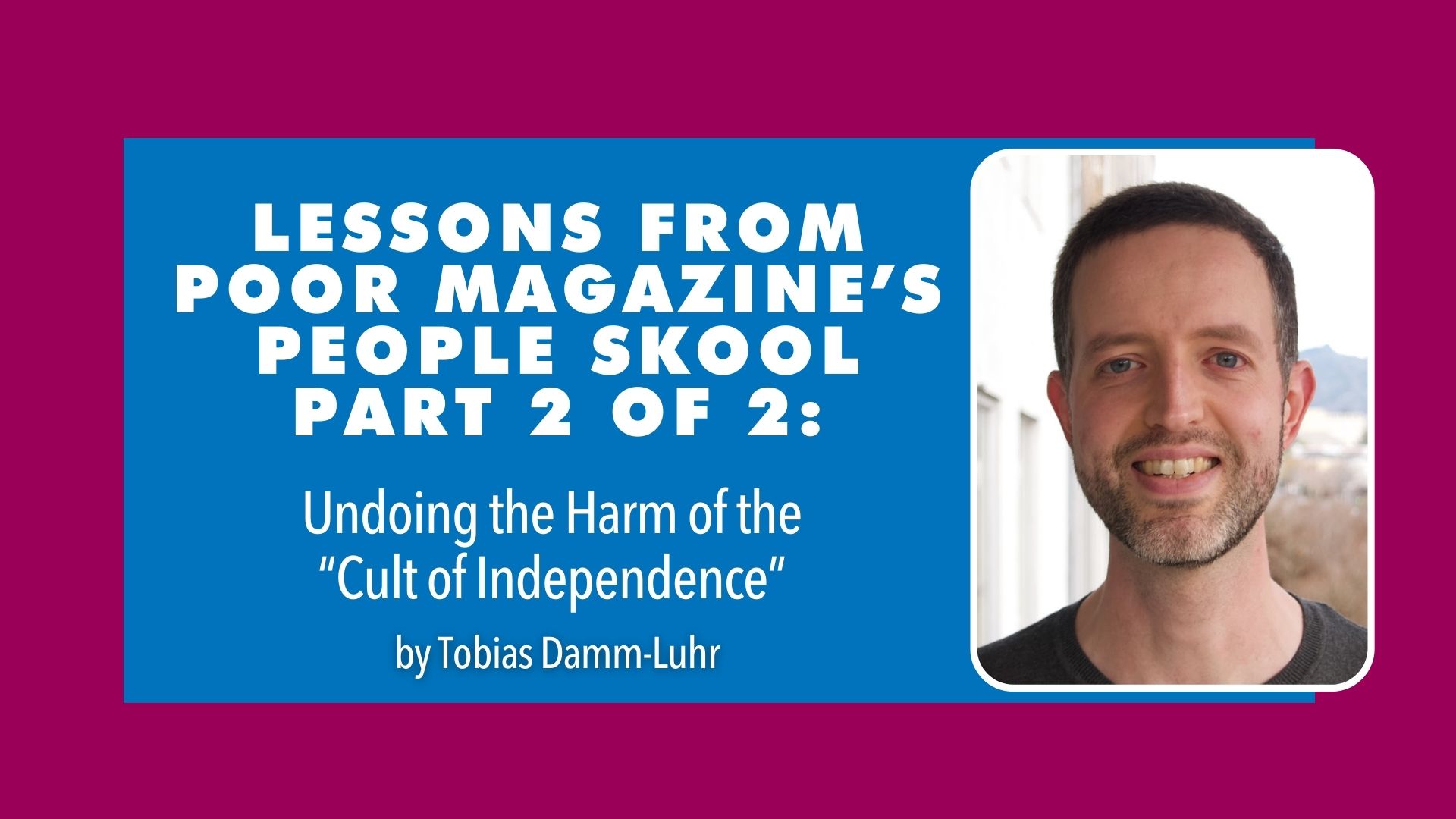 Read Part 1, "Telling Other Priviledged People What I Learned".

Friendly reminder to read the footnotes, including about the “Cult of Independence” concept! [1]

Among the many lessons I learned at Poor Magazine’s People Skool, I want to focus on the one about our culture in the United States separating me from my family and community of origin [2]. I had done a lot of thinking about our unjust economic system and was raised in a loving, politically progressive household, but this lesson was new to me, and I think it might be new to many of you out there too.

Growing up, like many of you out there, I took for granted that one day I would go to college and move away from home - because of my privileges and the culture my parents and I were raised in. I would make my home somewhere else, which was the healthy thing to do. I even learned that it was OK to move very far away from my family. I heard from my parents about how my mom moved away from her family in Germany to live with my dad in the United States. I learned in school about “teenage angst” and rebellion, which made living far away seem more OK and not harmful to myself or my family at all. I heard about people like me studying abroad and then even living abroad, and I imagined myself doing the same thing some day. I also heard widespread talk - in somewhat negative tones - about adults who “still lived at home,” like there was something wrong with them. I did not want to become one of those people. I pictured myself maybe living in another country someday, having learnt the language there (since I love learning languages), having fallen in love with someone, having bought a house or a condo, and living there together. How cool would that be?

With my family’s financial support - which was enabled by generous, hard-working parents and white owning-class intergenerational wealth accumulation - I was able to study abroad in China in high school and attend a 4-year private college a plane ride away without debt. I also lived in Germany after college to realize my dream of living in another country for several years and to reconnect with my roots there. I then returned to the US to go to law school in Seattle, then moved to New York City, and then to the San Francisco Bay Area.

With each move to a different place, I sometimes used money generously provided by my loving parents, other times earned on my own, to pay rent and buy things I needed, like kitchen supplies or furniture, most of which I had to sell or donate when I moved away. When I got a job with a high enough salary (through job searching, white male privilege, and good luck), I was able to rent my own apartment in communities I hadn’t lived in before, without knowing anyone or thinking about the effect I was having on the residents. Once, when I was looking for apartments in New York City, the real estate agent mentioned “the people who are moving to this neighborhood nowadays.” The neighborhood in question was a long-time home to working class southern European, Latino and Arab immigrant families - full of interesting grocery stores, restaurants and bakeries for me to “explore.” I asked, “Who were you referring to as moving to the neighborhood these days?” and he said, “People like you!” - which I took to mean white, academically educated, middle-class people with a corporate salary.

When I signed the lease for my new apartment, I also signed an acknowledgement that my rent was being raised above the rent ceiling.  I didn’t fully realize it then, but by living away from home, I learned how to pay money for goods, land and living space that I wouldn’t have needed if I hadn’t moved away, in communities I had zero connection to, whose permission I had never received before taking up that scarce living space. I have no way to measure it precisely, but I’m sure that my living in those communities and paying jacked up rents contributed to rising rents and the displacement of long-time residents.

In a larger sense, I was learning how to be dependent on money for my security - instead of family, community and a deep connection to land. I was becoming part of the “mobile workforce” [3] that capitalism needs because it prioritizes profits over people and the Earth. I relished the excitement of moving to new locations, but I longed for a feeling of being truly grounded and rooted in a community, even when I lived in one location for 5 or 6 years. I can imagine many of you out there feel the same way.

And I missed my family.  I spent a lot of my wages on plane or bus tickets home. And many times, my parents bought me a ticket, and since we have a loving relationship, I gratefully accepted. In addition to consuming furniture, cookware, and land and space in other people’s communities, I have also become a major consumer of jet fuel and accelerated climate change by flying, driving or riding a Greyhound bus so much. Not a pretty picture!

Being away for so long has also caused my parents a lot of pain, which I have witnessed in our many moments together and the goodbyes that followed. Often I would dismiss it, because the wider culture told me that what I was doing was perfectly normal. Also, the sexist notions that I had absorbed about women getting “overly emotional” or “irrational” enabled me to specifically dismiss my mother’s pain. I now understand that this was wrong, and that I was causing both my parents real pain. I’m truly sorry, Mama and Papa.

As I got older, I realized how lost I felt, and how much I needed to feel rooted in a place and a community of people. I thought about how connected my parents are to people around them. And I talked with people like my aunt, who had never moved farther than an hour’s drive away and had chosen to move back in with her parents when they needed her. I saw what a wonderful support system of extended family, friends and colleagues she had built up around her over decades, and how she had such intimate, detailed knowledge of the land on which she grew up and still lives. I realized how much community building and support I had sacrificed by moving around, and how much time I could have spent with my family that we will never get back. It’s gotten to the point where my parents feel rushed if I’m visiting for a week because they feel like they need to make the most of every minute of our time together.

Finally, I realized that I lack a deep connection with land. Not just detailed knowledge of a geographic area, but a feeling of connection to land as something that can provide me with everything I need and that I can give everything I have - just like loving parents and their children do for each other. It might be too late for me to truly build that connection now. The best I can do is try, and help others like me try as well.

PeopleSkool taught me about the harm that I caused by leaving home and following what they call the “cult of independence”: harm to my family, to the communities I’ve lived in, and to myself. And that to start healing from that harm, the first step is to move back in with my parents, if possible, or at least to live closer to them and move back to the community where I grew up. I haven’t figured out what that will look like for me exactly, but I’ve started envisioning it.  Hopefully someday soon, I’ll no longer need to perpetually consume land and space in places I have no prior connection to, not to mention jet fuel and home products (my mom is saving some pots and pans for me). I will hopefully be able to spend regular, quality time with my family, and get reacquainted with the place I grew up. I hope I’ll be able to take care of my parents as they age. And maybe, just maybe, I’ll be able to feel rooted in a community of people and truly feel at home with the land.

[2] [^Jump back] Tiny Gray-Garcia created this concept and calls it the “away nation.”

[3] [^Jump back] I learned the term “mobile workforce” from Tiny in the People Skool course. It refers to people like me who live away from their families and can be moved around or attracted to various places to suit the needs of businesses and institutions. See, e.g., “Organized Resistance of the People: Unions” on p. 253 of Poverty Scholarship.