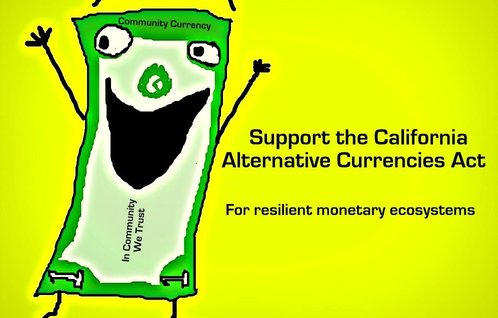 Dating back to the California Constitution of 1849, Section 107 stated:

No corporation, flexible purpose corporation, association or individual shall issue or put in circulation, as money, anything but the lawful money of the United States.

As our research has demonstrated, the legal definition of "money" has always remained ambiguous and imprecise. The repeal of Section 107 reflects the growth of a diverse range of new payment systems and community-based means of exchange that have flourished in recent years. Driven both by economic necessity and innovations in technology, communities across California and across the world are creating their own means of exchange that support economic resilience and social cohesion in the face of rapidly changing economies.

AB 129 removes an outdated yet significant legal barrier to the creation and circulation of many types of alternative currencies, including local currencies like Davis Dollars and Bernal Bucks, crypto-currencies such as Bitcoin and Freicoin, reward point systems such as frequent flyer miles, and other means of exchange beyond "the lawful money of the United States."

Read more about community currencies and SELC's work to support economies based on barter, gifts, time banks, and local currencies.