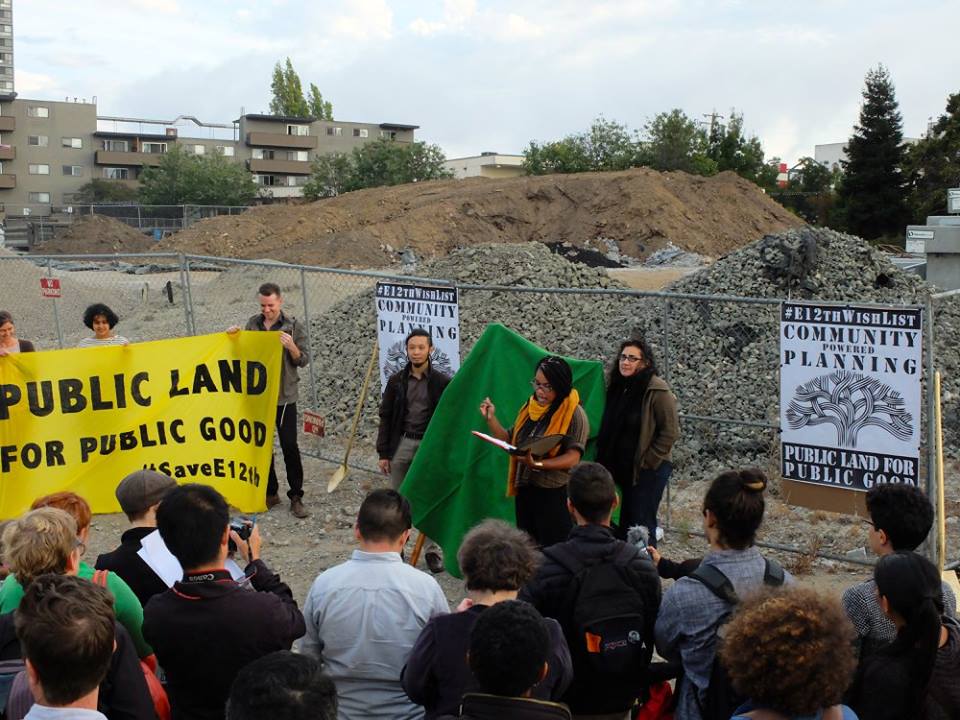 Photo by Save the E12th Parcel for the People

The result of this community planning process: The E12th St. People’s Proposal. This visionary plan, compiled by the E12 St. Coalition in partnership with nonprofit developer Satellite Affordable Housing Associates, includes a 100% affordable housing complex, a public park, commercial space for local businesses, and more. (The grassroots coalition has formally submitted the People’s Proposal to the City of Oakland for consideration and is currently competing against two other proposals, neither of which include anything close to 100% affordable housing.) All of this has been motivated by the radical idea that public land should be used for public good. Radical indeed in a region with one of the fastest increasing land values in the country.

This is just one of many hopeful stories of communities coming together to simultaneously challenge the conventional profit-driven process of economic development, and assert community-driven alternatives that do not displace existing communities. What is foundational to the call for “development without displacement” is a claim to community self-determination, that communities have both the right and the capacity to set their own priorities and pathways for creating more equitable neighborhoods. In other words, communities have the collective right to participate in the processes that shape their future, particularly those most impacted by those processes. The E12th St People’s Proposal is visionary both in what it imagines - a 100% affordable housing development in the heart of one of the most rapidly gentrifying cities in the country - and in who it allowed to imagine and shape the development process.

At this point, there is widespread acknowledgment that the Bay Area is experiencing a housing crisis. However, proposed solutions to the crisis rarely seem to identify or address its root causes, and are most often framed in a market-vs-state binary. But what if that framework - that it will be either the market or the state that solves the housing crisis - is one of those root causes? What if communities themselves, particularly those that have been historically neglected by both the state and the market, were enabled to create their own solutions?

The initial E12 St controversy perfectly illustrates the problematic relationship between the state and the market. It was in the City’s narrow financial interest to try to sneak through a deal with a for-profit developer to build a “market-rate” high-rise apartment complex with one-bedroom apartments starting at over $3,000 per month. To put this in perspective, “market-rate” is now only affordable to household making $113,000 or more in yearly income, while the median income for the area surrounding the Eastlake neighborhood is $38,363. Particularly in a country where wealth is so unequally distributed - wealth initially accumulated through the theft of land, labor, knowledge, and natural resources of Indigenous, African, and other non-European people - the provision of a basic right such as housing should not be left solely to a system where money buys power and certain groups of people are systematically dispossessed.

The state, supposedly the counterbalance to the market, actually creates the necessary conditions for the market to operate in this way. In the case of the East 12th St Parcel, it has taken almost a year of sustained organizing, direct action, community engagement, investigative journalism, and legal analysis to even get the state to consider a proposal for affordable housing, something it is in fact required to prioritize under the Surplus Lands Act.

Perhaps it’s time we collectively acknowledge that the traditional model of profit-driven economic development tends to be part of the problem, rather than the solution. “Economic development," writes Shawn Escoffery in the preface to the Democracy Collaborative’s recently published report Cities Building Community Wealth, "operates on an implicit assumption that everyone benefits from a city’s prosperity and economic growth. But that’s a sad fallacy.” A recent study by the Brookings Institute shows that income inequality has actually worsened in the nation’s largest 50 cities since 2012 - indicating that the wealthiest have captured most of the economic gains since the financial collapse of 2007. And, of course, even that class inequality is not evenly distributed: by at least one study, the median net worth of a white household in America today is $116,000, compared to only $1,700 for a black household. 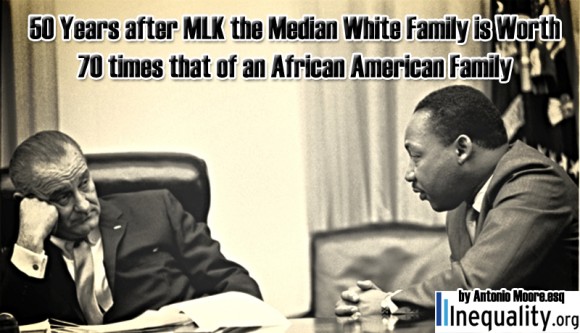 So what might be an alternative? Stories like the East 12th Street struggle begin to point the way by demonstrating an oppositional and visionary alternative. Their actions also imply some basic questions like: What if housing was treated primarily as, well, housing, rather than an investment? What if we recognized land as a living source of common wealth rather than an abstract commodity? What if community development was actually shaped by all members of the community, not just the most privileged and most likely to profit?

One way to potentially achieve this is to manage our cities as a commons. The commons is a socio-economic system that has been implemented for millennia in societies across the globe to steward a wide variety of resources and cultures. But a commons can arise anytime a group of people decide to collectively manage an essential resource, with special regard for equitable access and long-term stewardship (to paraphrase a definition by commons scholar and activist, David Bollier). How might seeing our cities as a commons lead to more equitable forms of community development? Here are some ideas:

Land as a commons: None of us created the land beneath your feet or beneath your home. So why should certain people profit off its existence while many more are excluded from even having a place to sleep? In a land commons, the community of residents would collectively determine priorities for land use, perhaps in a process similar to the E12th WishList People’s Planning Forum. Many communities across the country are rediscovering the community land trust (CLT) as a tool for community-ownership and control of land. By separating the value of the land from the structures and activities happening on the land, a community land trust allows a community to permanently preserve the affordability of and equitable access to land for housing, urban farming, local businesses, and other community-determined uses. Originally developed by civil rights organizers and farmers in the South who were systematically denied access to land, the CLT model is again being deployed in urban communities of color as a strategy for community wealth building and resisting economic displacement.

Housing as a commons: While the CLT is one mechanism for the commons-based management of land, housing cooperatives and intentional communities are similar models for collective management of housing and living spaces. Popularly associated with hippies and other crunchy white people, housing cooperatives and intentional communities actually have a long history as tools of survival in the African-American community and many other marginalized communities. From the extensive network of low-income housing cooperatives in New York City created in the 1970s to the “Panther Pads” created by the Black Panther Party as political safe houses in the 1970s to Cooperation Jackson’s current vision of urban ecovillages, cooperatively owned and managed housing can be economically efficient, ecologically sustainable, and socially regenerative. Such an approach can help ensure that many more people are housed using existing housing stock and, as importantly, begin to recreate our relationship to houses as spaces for social and economic production, rather than financial speculation and exclusion. 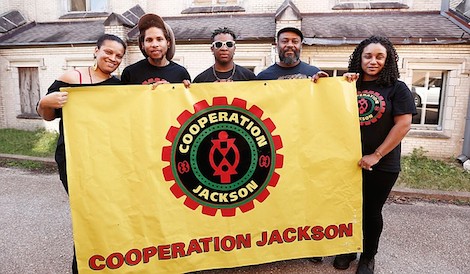 Livelihoods as a commons: Displacement and gentrification are not simply about housing affordability. Certain communities are vulnerable to displacement because of generations of disinvestment, job discrimination, mass incarceration, educational inequality, environmental injustice, and more. In a highly monetized society, people should have a right to dignified and productive livelihoods - it’s no coincidence that both Martin Luther King, Jr and the Black Panther Party called for full employment for all people. Allowing people to both own and control their own labor, for example through worker cooperatives and multi-stakeholder cooperatives, has been shown to create more stable, dignified, and higher-paying jobs over the long-term. Furthermore, reducing income inequality is actually better for everyone, not just the poor: numerous studies have shown that life expectancy and other indicators of personal and social health is lower in societies with higher income inequality.

These are all ideas we are actively working on or thinking about at SELC. We're also developing new ideas for cooperatively financing and managing housing and land as a commons, and creating new legal structures for the commons-based management of, well, everything. Read more about our Housing Program, Cooperative Program, and local policy work and stay tuned for more.

The commons offers a framework and a process for effectively and equitably stewarding the resources communities need to live in dignity. If we have a collective right to a resource, we should be able to participate in decisions about that resource’s use. From this perspective, all sorts of things start to look like they should be managed as commons: healthcare commons, learning commons, restorative justice commons, renewable energy commons, financial service commons, investment commons, food commons, water commons. It also happens that all of these things are being horribly mismanaged at the moment, literally putting life on earth in peril. So what about this for a radical idea: let people participate in the decisions that most directly affect their everyday lives.