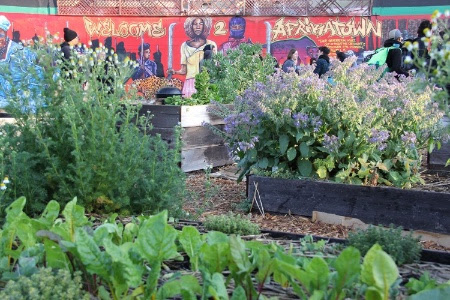 On a warm spring day at the end of April, Sustainable Economies Law Center and Qilombo/Afrikatown hosted an Afrikatown District Tour and Land Liberation Strategy Session as part of an ongoing effort to build solidarity and develop cooperative responses to Oakland's displacement crisis. A diverse group of community organizers, neighbors, funders, lawyers, and comrades gathered in the Afrikatown Community Garden to share visions for community self-determination and introduce our respective work. It quickly became a space for cultivating new relationships and rooting ourselves in the social and material ecology of Afrikatown’s particular project to liberate land for community need. 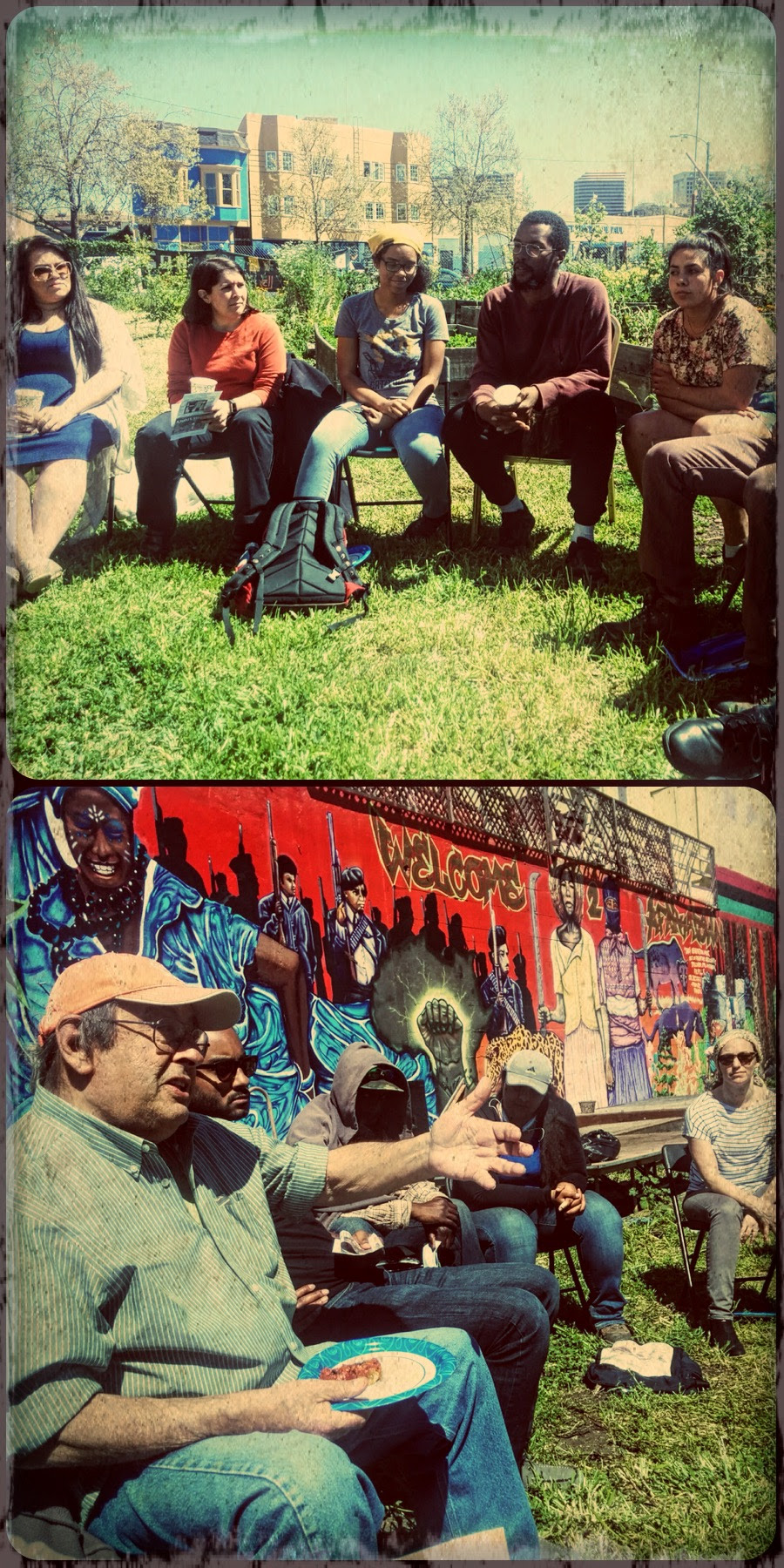 Led by Hank Herrera of Sacred Community Land Trust and Daisee Francour of the Christensen Fund, we began by naming and honoring the Ohlone, the first people of this land, and giving thanks to all the seen and unseen labor that nourishes us as people and a community. Our opening circle then introduced each of us gathered there, and started weaving together themes of community control of capital, healing from racial trauma, culture as resistance, biocultural diversity, community food production, movement building, beloved community, energy justice, non-extractive economies, and embracing complexity.

During our walk around Afrikatown District, we learned the history of the neighborhood, the transformations that have already taken place, and the possibilities for creating and preserving community control of the block through relationships with allied neighbors, landowners, investors, lawyers, and organizers. We shared a powerful experience when we stopped at the site of the recent West Oakland fire and stood in the shadow of a burned out building that had recently been sold to speculators, displacing more than 80 mostly poor black and brown neighbors. 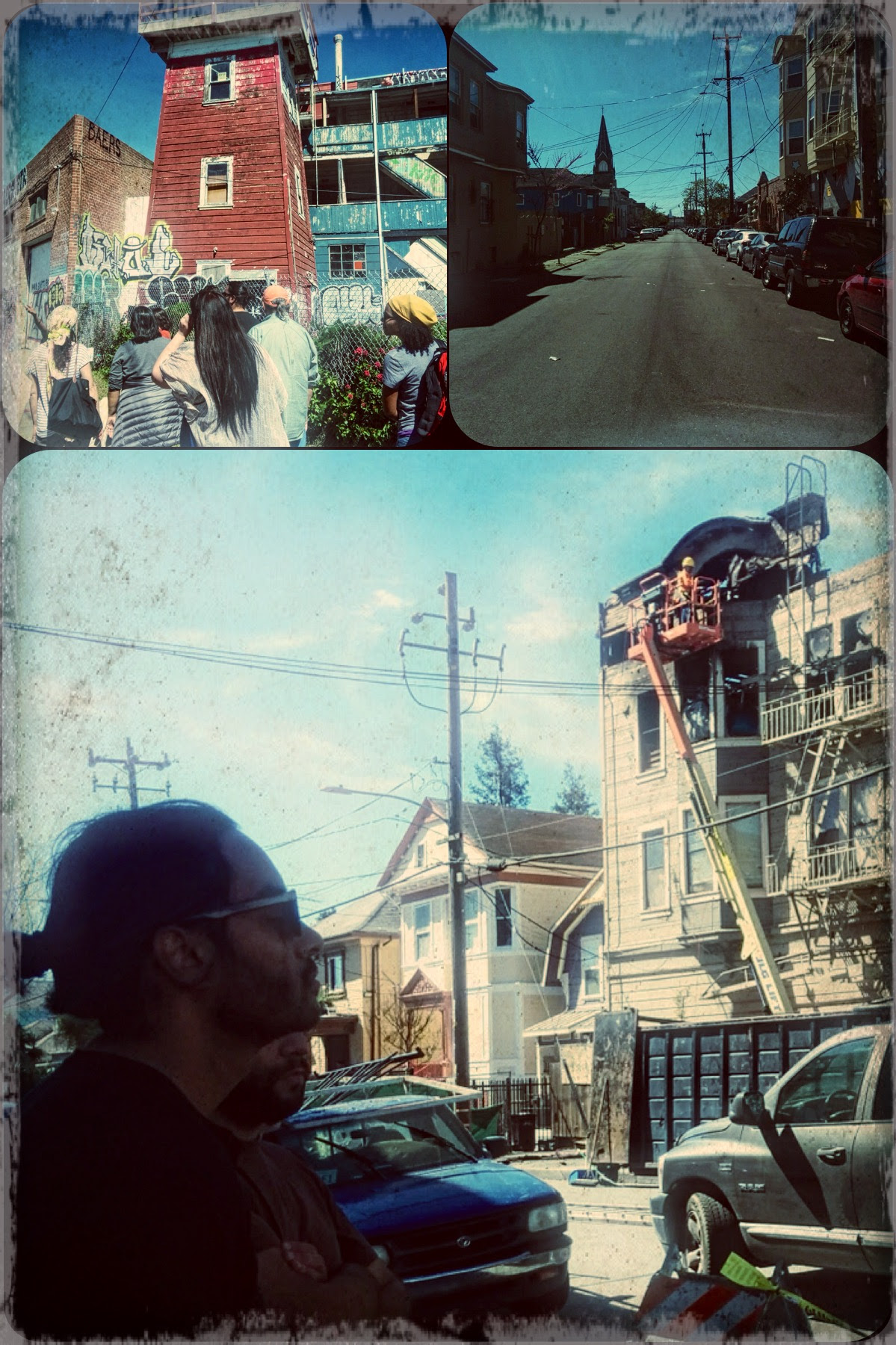 Returning to Qilombo, we continued our conversation on what it might take to steward community ownership over the whole block and better support the folks who have been organizing as volunteers for years to make this a refuge and a political home for so many.

We closed our circle with a deeper sense of all the work that has been done, as well as all the work to come. With so many unanswered questions still tugging at our hearts, we truly hope this day was the beginning or continuation of our shared commitment to building relationships with one another and to our collective work. Stay tuned for more conversations to come, and possibly even something like a "People's School for Land Stewardship" to emerge later this summer! 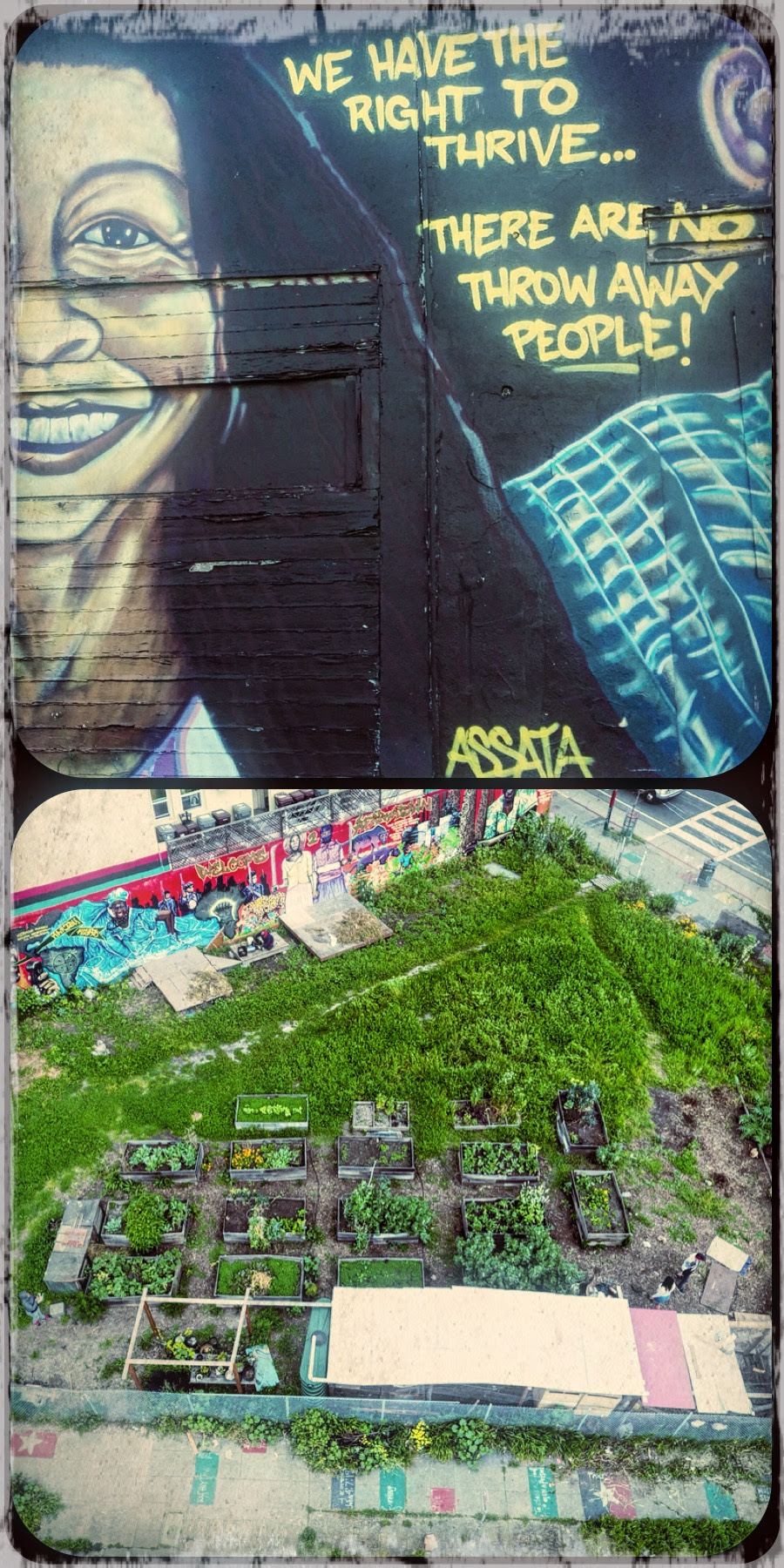 Lots of gratitude for the folks at Qilombo/Afrikatown for welcoming and hosting all of us. We are extremely grateful for all who were able to attend and share stories and pizza with us, and we are just as appreciative for those in our movement family who reached out to us in solidarity and wish to be included in next steps!

Want to get involved?

Support Afrikatown in getting community ownership of the garden!

Support Qilombo Community Center with their program and operational costs!

And stay tuned for upcoming events on this topic, including our May 15th Teach-In: Cooperative Solutions to the Housing Crisis at Qilombo.