From May 2nd – 4th, I was a guest at one of the most inspirational and motivating conferences I’ve ever attended, the Jackson Rising New Economies Conference in Jackson, Mississippi. The primary objective of the conference was “to educate and mobilize the people of Jackson to meet the economic and sustainability needs” of their community. The conference did much more than that.

It brought together cooperative members, developers, and specialists to train, exchange development strategies, and coordinate local, regional, and national movements for cooperative development. Social justice advocates and community organizers spoke about their personal endeavors across the country and around the world in creating a cooperative economy. Participatory and practical trainings were on offer, building the capacity of the Jackson community and participants from around the country. The Sustainable Economies Law Center partnered with the Green Collar Communities Clinic and the US Federation of Worker Cooperatives to offer two trainings, Coop 101: Intro to Cooperatives and a session on How to Start a Worker Cooperative.

(Thanks to VoiceRaiser for these amazing videos!)

It felt like a pivotal moment in social justice history; a galvanizing conference that showed the potential of cooperative economics in action, made all the more sobering because of the passing of Chokwe Lumumba, the defeat of Lumumba’s son in a special mayoral election, and the quick response by the new administration toward any future cooperative development work on City Hall property. Many were talking about the need to rethink and rebuild, to continue the work that Lumumba, the Malcolm X Grassroots Movement, and Cooperation Jackson had set in motion. The community building efforts around cooperative development that led to the Jackson Rising New Economies Conference was the result of years of organizing, education, and engagement by these organizations. It’s an instructive and elucidating lesson to the rest of the cooperative community, especially as we organize to build economies based in solidarity and cooperative economics around the country.

Many others have written and spoke about the conference and its impact. Here are just a few:

Up South, Down South: A Detroit Delegate’s Recap of Jackson Rising

EXCERPT: Last weekend, Jackson Rising : New Economies Conference boldly moved the question from “Will my boss be racist?” to “How can I/we own the company that I am working for and the resources generated from my own work?” Shifting the discussion from individual survival to “economic democracy” and the “sustainability needs of our community” was a crucial advance.

EXCERPT: At the conference, Kali Akuno, who had been coordinator of Special Projects and External Funding in the Lumumba administration, outlined the vision: “What I know that we were planning on doing … was to transform how contracts were structured, what they prioritized, what they incentivized, who was incentivized and what they could do. Change the procurement: who we bought from and why. Those were two immediate things we were working on. Another piece was setting up an incubator to foster the development of cooperatives; the government can’t run the co-ops. It won’t build them, but it can set the table … for most of the past 20 years, even though there has been a succession of black mayors, 90-95 percent of contracts to people who don’t live in Jackson. It was all about hiring people in Jackson.”

EXCERPT: So two paths emerged. One was neoliberal, and aimed at exporting as much of the Black poor as possible, in order to open up wider areas from gentrification attracting the better-paid servants of the businesses that served government. The other was progressive, the Jackson Cooperation plan, which aimed at growing new worker-owned businesses and new housing coops that worked in tandem with the Black farmers of the ‘Kush.’ It also stressed democratized city services, while creating new alternative energy and recycling startups and also taking advantage of the city’s position as a major regional transport hub. It’s a conflict not unique to Jackson and shared by many cities around the country."

The US Federation of Worker Cooperatives Team! 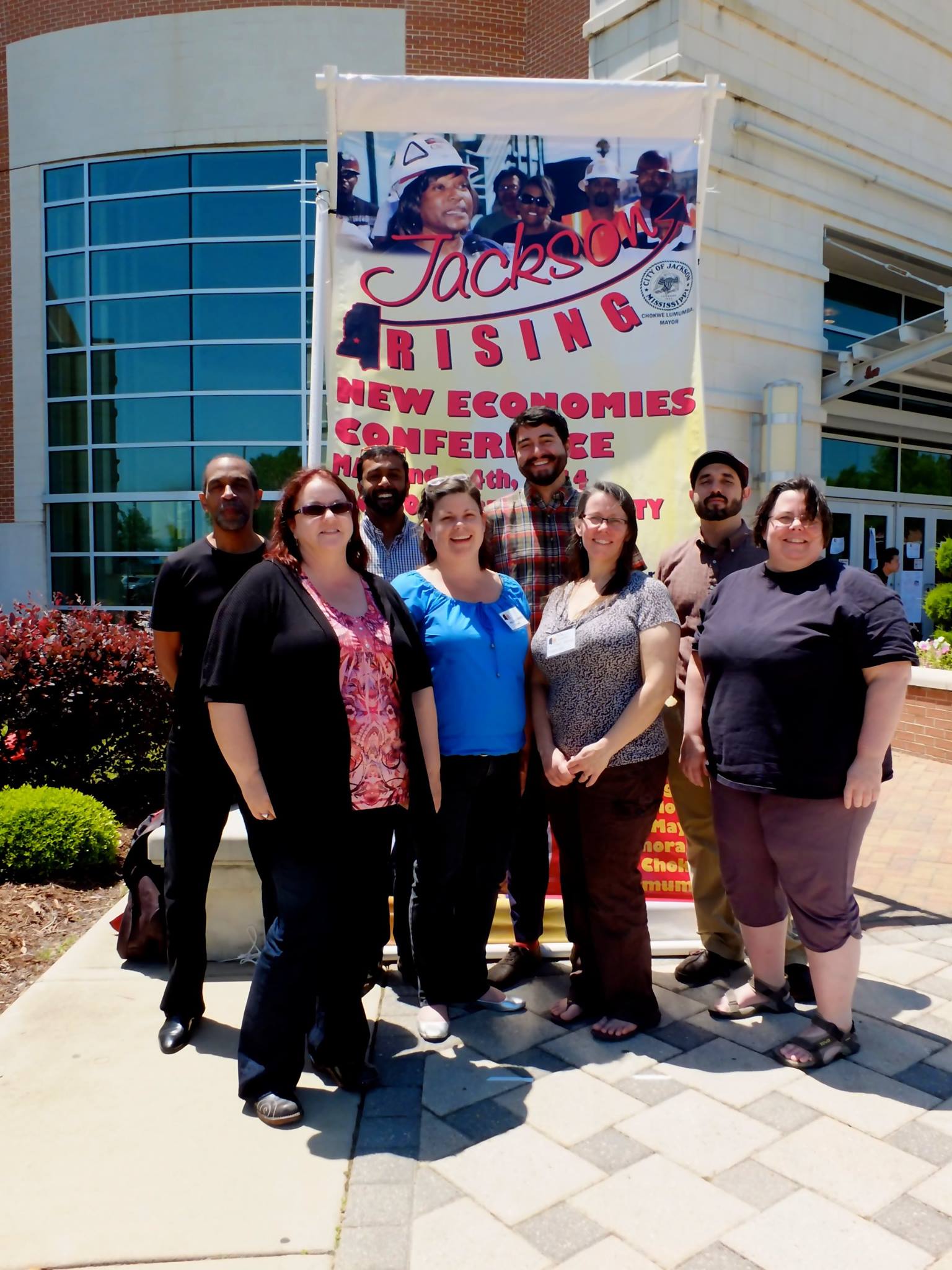