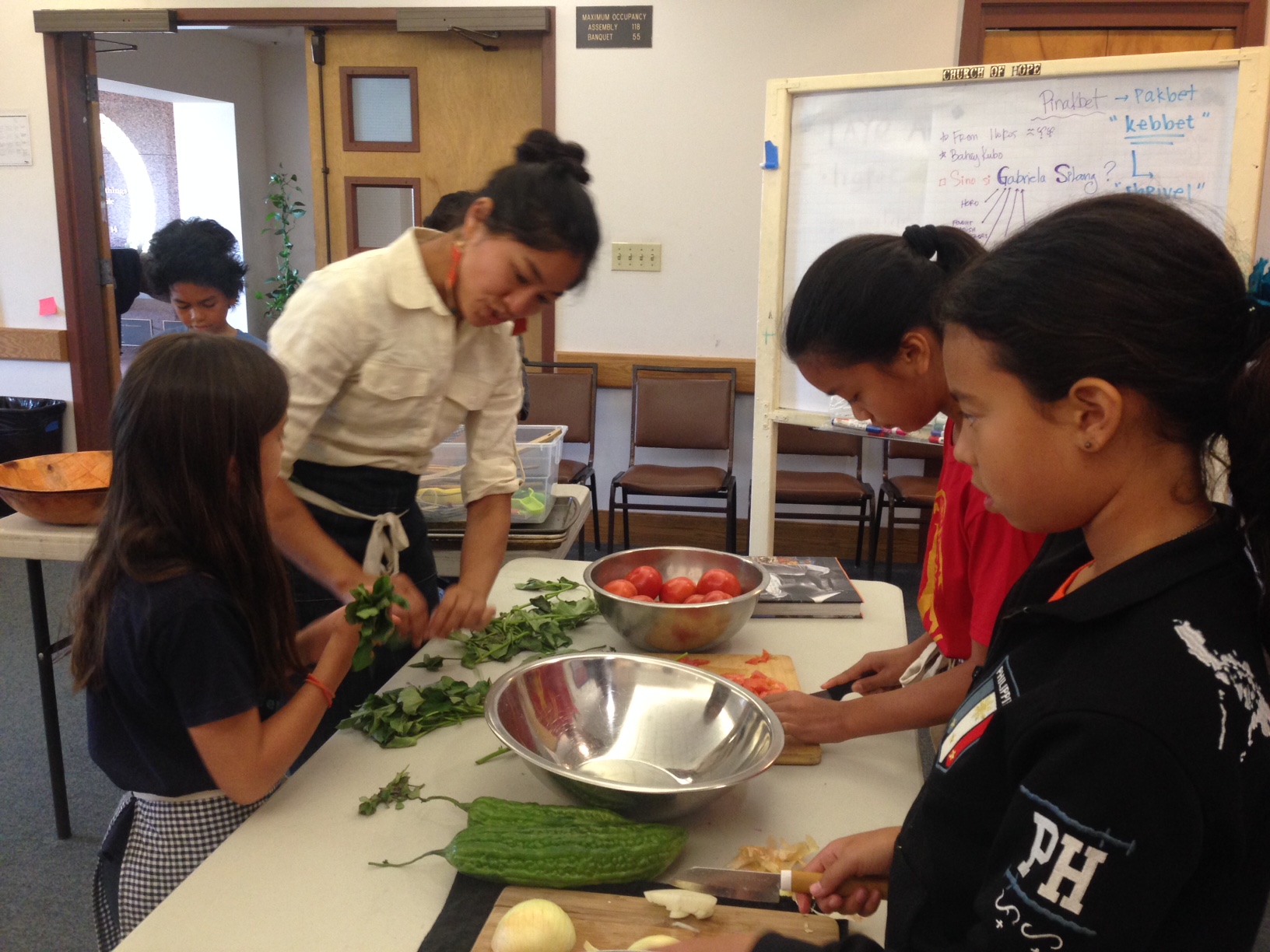 I arrive on a day when the kids are learning about the Filipina revolutionary hero Gabriela Silang, making pinakbet, a vegetable stew, and getting familiar with the Tagalog words for emotions and feelings. I come to the Lakeshore United Methodist Church community center to find a group of kids chopping up vegetables with their instructor, chef and farmer Aileen Suzara.

Sama means “together” in Tagalog, and Sama Sama Cooperative Summer Camp is a day camp for children ranging from 5 to 11 years old, founded and collectively run by parents to educate their children in Filipino language, culture, arts, and ecology.

The camp instructors employ hands-on learning, focused on language and cultural arts, movement, and music, in the context of Filipino identity in the Philippines and in the United States.

“We wanted cultural education,” says Lisa Juachon, one of the camp’s founding mamas. “As a young person your world view widens outside your family when you enter elementary school, and we want to see ourselves reflected in our education. We want for our kids to see their culture not just at home. To see culture passed down in community.”

Sama Sama began in 2014 after a year of conversation among a few mothers. “We were five families initially and we started to think about other families we knew that might want to do a summer camp share. We reached out to friends in our network and it grew to 20 families,” Juachon says.

In one room, the older kids are chopping up vegetables and Tina Alejo is teaching them the names of okra, tomato, bittermelon, and squash in Tagalog. In another room Rani Marcos is teaching the group of younger kids to express feelings with Filipino words.

Monica Ly, parent and member of the coordinating committee for the cooperative believes cultural education is the strength of the camp. She says, “It’s really important for our kids to know their roots. It’s important for them to know who they are and to be proud of that part of them.” 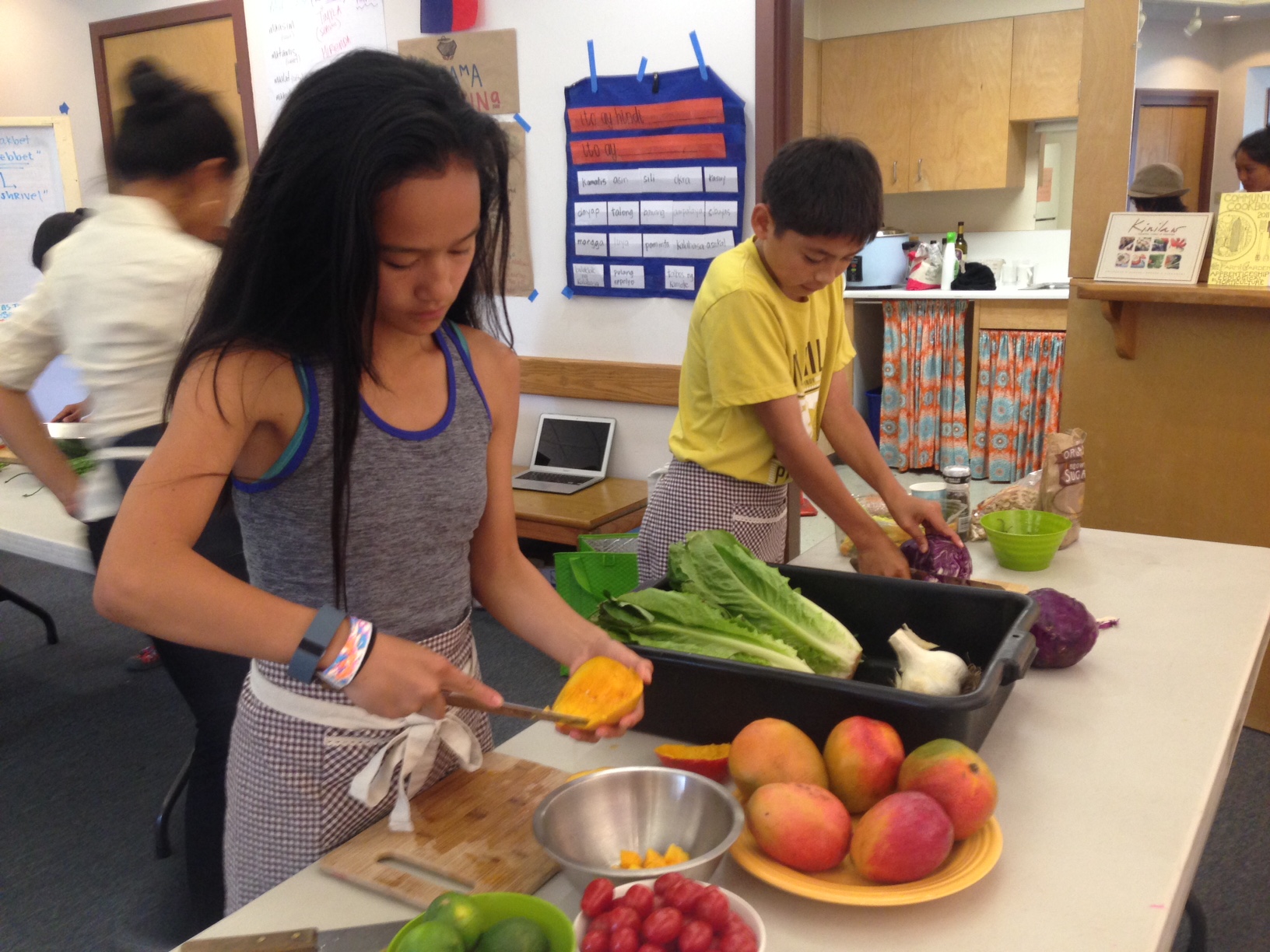 For the founders of Sama Sama camp, the cooperative structure made sense as a way for parents to build a camp experience that they wanted for their children.

“I offered up the idea of doing a cooperative, with a shared vision and mission. It was really functional--the resources were us, the assets we bring to the table,” Juachon says.

The camp today has a paid teaching staff of five. Parents contribute a fee for their children to participate in the four-week camp, which goes towards the staff and for supplies. The camp operates under a non-profit 501(c)3 fiscal-sponsorship. In its third year this summer, the camp has 40 parents and 22 children participating.

Parents share various responsibilities. A central coordinating committee of parents organizes shifts for support tasks and the administration of the program.

The theme of this year’s camp is “Fire and Unity.” In addition to many cooking and language lessons, the camp participants learned about Filipino martial arts, met Tarika Lewis, the first female member of the Black Panther Party, visited Front Porch Farms to learn about land and agriculture, participated in Philippine indigenous weaving lessons, and marched for Black Lives Matter, all within the camp’s four weeks.

Ly says the camp is a unique kind of cooperative. “This is families and kids, it’s inter-generational. It’s the family structure. It’s not just a job. It’s creating this space and rich content for the kids.”

Alejo, who teaches Tagalog language for the camp says that cooperative values are an inherent part of Filipino culture.

“It stems from bayanihan, people working together,” Alejo says. “Cooperatives are so natural, if you look at childcare, shared baby-sitting. A lot of it comes from daily tasks shared in the community. It’s informal, it follows the dictates of community life.” 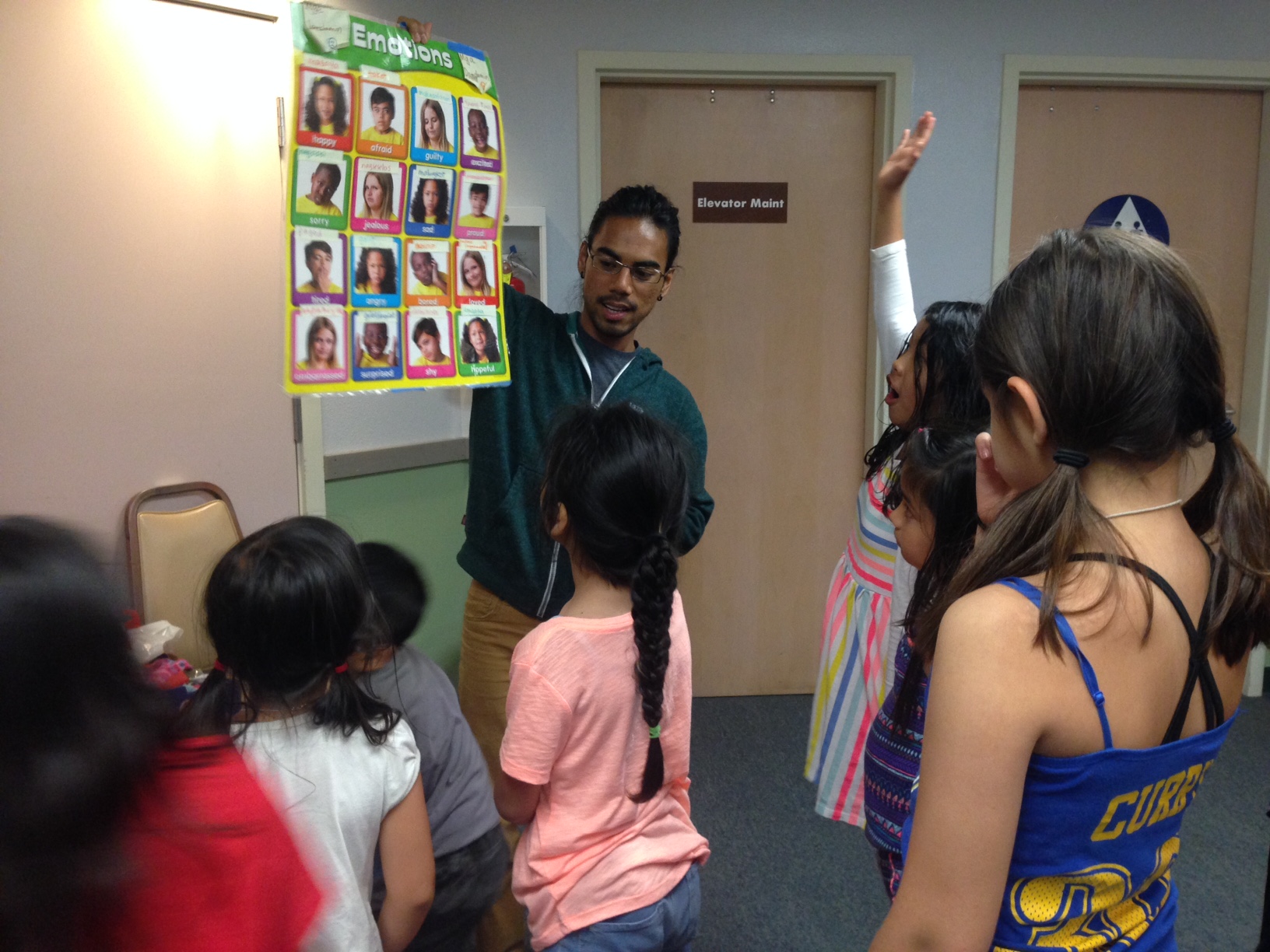 By the end of my visit I am eating a bowl of pinakbet and I have learned that pakbet means shriveled in Ilocano, referring to the way the vegetables in the stew shrink when cooked. Ilocano is the language of the Ilocos region of the Philippines where both the dish and revolutionary Gabriela Silang come from. I have seen the kids act out the life of Silang who was killed at the age of 32.

Sama Sama is just one example of how cooperative values are inherent in the culture and history of communities of color. The camp showcases how cooperatives can reinforce cultural education and activism around social justice issues.

News of the camp has reached across the country. Sama Sama was featured on The Filipino Channel’s news program Balitang America, and the program Adobo Nation. Families from Seattle and Vancouver have reached out to learn about their model, Juachon says.

“Right now we are just a fiscally-sponsored project. We are thinking about becoming our own entity, potentially expanding work beyond the summer camp. Sama Sama will be what it needs to be based on the people involved.”

Projects and enterprises like Sama Sama demonstrate the opportunity for cooperative economics and cultural empowerment to be mutually reinforcing, and for communities of color to take a lead in developing the kind of economies we want to be a part of.

From places like Jackson, Mississippi, to Buffalo, New York, to Richmond, California, people are turning values of cooperativism inherent in their histories towards projects that strengthen their communities. Communities of color across the country are using cooperatives as a way to not only build economic power, but reinforce cultural values and build political movements.

And it makes a lot of sense. Even the kids get it.

Learn more about Sama Sama Camp at samasamacooperative.org, and www.facebook.com/samasamacoop