Teachgiving: Occupation of Land Within Peoples' Movements & The Intersection of Law and Liberation 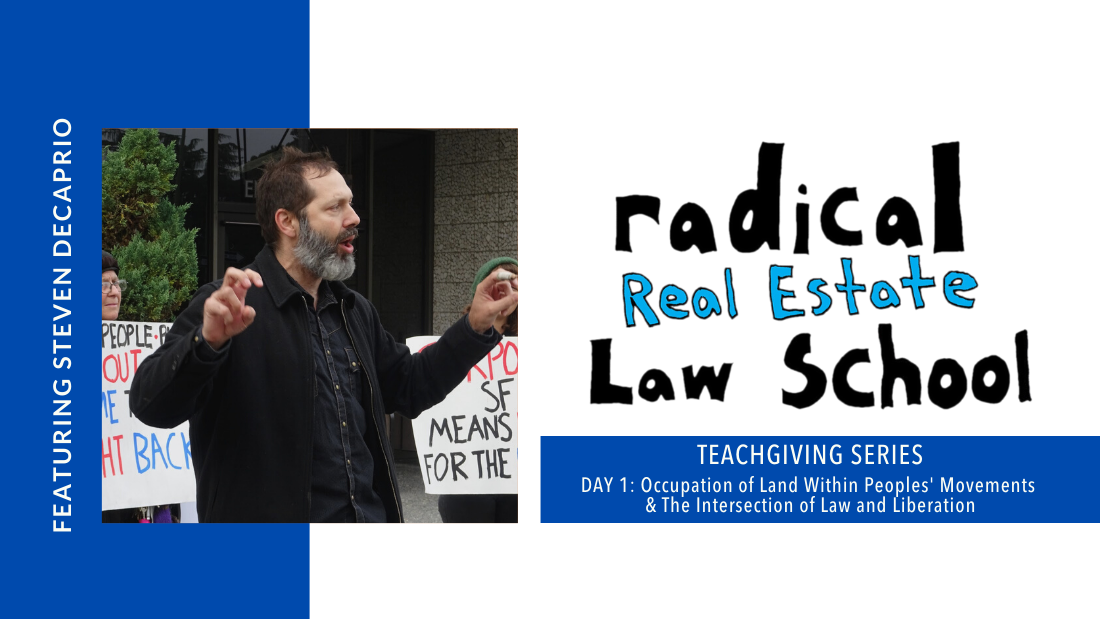 Steven DeCaprio will join us to discuss the practical application of DIRECT-ACTION tactics with an assessment of how actions intersect with the law, political power, people power, and social and cultural norms and expectations. Steven will provide an overview of how the concept of property ownership was developed and will then discuss how dissonance between these laws and systems of colonization and oppression provide opportunities for peoples' movements to seize power and property through DIRECT ACTION. A frank discussion will follow about specific tactics and strategies, that may be used by those in attendance, with an evaluation of risks and opportunities.

If you need Spanish Language or American Sign Language interpretation, please email Tia ([email protected]) with Subject Line "Interpretation Request - for [mm/dd/yyyy] event." We will do our best to accommodate your request. 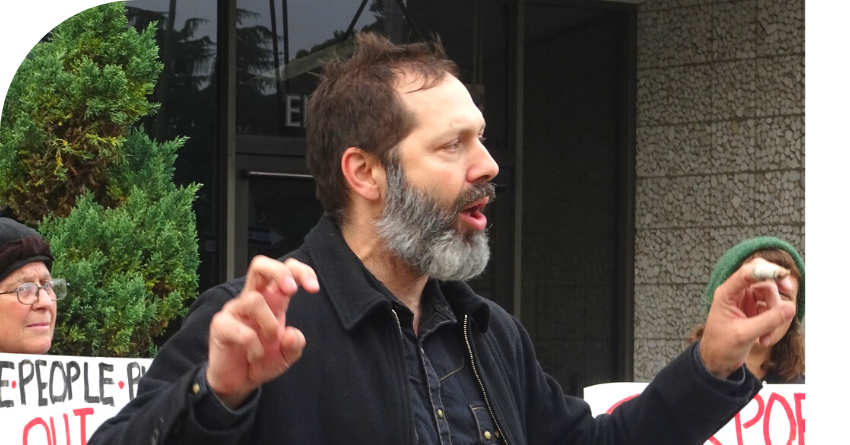 In 1997, Steven moved to Oakland, California to find community and pursue his passion for music. His bands Lesser of Two and Embers released multiple albums and toured Europe, Canada, Mexico, and the United States. After arriving in Oakland, Steven also began organizing against police brutality with the October 22nd Coalition and the Stolen Lives Project. In 2001, he began working with the California League of Conservation Voters and has continued to work in both social justice and environmental non-profits.Steven DeCaprio is Lebanese Maronite, born in Pensacola, Florida, and raised in the Gulf Coast by his adoptive family. In the 1980s, Steven led efforts opposing Neo-Nazi recruitment in the Florida Panhandle and southern Alabama as he advocated for inclusive spaces for art and music. Throughout the 1980s and 1990s, Steven worked in low-wage jobs primarily in the food service industry.

In 2000, Steven became homeless during the Dot Com Boom and eventually founded Land Action to create a framework to address homelessness and displacement through mutual aid among others struggling with housing insecurity. He became known as an expert in occupying, improving, and repurposing abandoned properties. He was named one of 12 Visionaries of 2012 by the Utne Reader for his work which was adopted by organizers during Occupy Wall Street. Steven also led efforts after the Ghost Ship Fire to end sweeps of people seeking shelter in warehouses and other commercial spaces. He co-founded the Landless Peoples Alliance resisting sweeps of homeless encampments in Oakland and Berkeley. The strategies developed in these campaigns have served as templates for anti-displacement organizers.

Steven completed the Law Office Study Program and passed the California State Bar Exam without attending law school. However, the California State Bar denied his application to practice law citing his former homelessness and housing advocacy as grounds to determine that he lacked sufficient “moral character”. Steven has been an advocate for more inclusion in the legal profession by supporting poor people, people of color, and community organizers to study law through the Law Office Study Program. He is a co-founder of the Association of Legal Apprentices which was formed to create a framework for mutual aid supporting apprentices to complete the Law Office Study Program. This included work with the National Lawyers Guild to develop an apprenticeship program.

Steven continues to work in professional leadership in the environmental movement.