Workshops in Northern California for home based food production enterprises

Our friends at UC Cooperative Extension are putting on a two-part workshop series at six Northern California locations designed especially for farmers interested in producing value-added products in their home kitchens. Participants will learn about the new California Homemade Food Act (AB1616), which allows individuals to prepare and package certain non-potentially hazardous foods in private-home kitchens referred to as “Cottage Food Operations” (CFOs). The workshop series will cover: CFO Law; food science and sanitation; business operations for CFOs; packaging, storage, and marketing of CFO products; and hands-on demonstrations and tastings of CFO products. $25 with advance registration/$40 at the door, space permitting. For more information and to register: http://ucanr.edu/cfoworkshops.

On Wednesday, April 30, the Neighborhood Food Act passed out of the Assembly Local Government Committee by a narrow margin. Assemblymember Bradford worked with the Committee to make some tough decisions to address concerns raised by opponents and some members of the Committee. Assemblymember Bradford agreed to remove the city zoning component of the bill and make some further adjustments to the tenants’ rights section, limiting the growing space to the backyard. We do not believe the bill would have passed out of the Committee without these agreements.

UPDATE on the Neighborhood Food Act and a Call to Action!


The big property owners' lobby, the American Planning Association and the League of California Cities are trying to kill our bill. They do not want to grant all Californians the right to grow food on land they already have lawful access to.
Read more

Grassroots versus corporatized sharing economy: a conversation on KPFA Radio 4/7/14

A conversation with SELC's program directors Ricardo Nuñez and Yassi Eskandari-Qajar about the where the sharing economy is at and where SELC believes it should be going. One listener replied after the show, "Gettin to call in to the SELC folks. It does not get any better than that. Thank you." 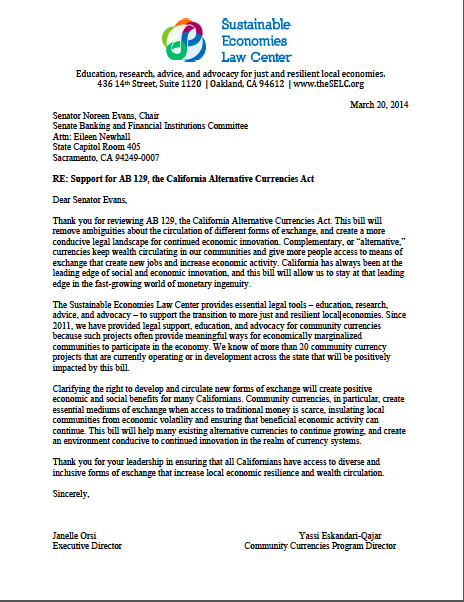 Join Us in Creating More Just and Resilient Economies

Happy Spring, SELC supporters! We’ve been busy preparing the soil of a new legal landscape that supports community resilience. Will you help us sow seeds of resilience this spring?

Help us legalize sharing and grow the movement for more just and resilient economies - join our Community TODAY by becoming a SELC Community Member!

Like a community-supported farm, SELC thrives when our community invests in our work -  whether that is an investment of time or money. That’s why we are excited to launch our new Community Membership Campaign! By becoming a SELC Founding Member, you can turn our advocacy campaigns into new laws, grow our community of passionate new economy advocates, and get special discounts and invitations to future SELC events and workshops!

Read about how SELC is revolutionizing legal services and cultivating a new legal landscape this Spring! 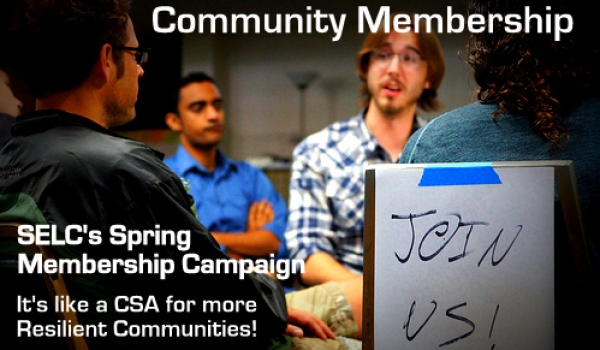