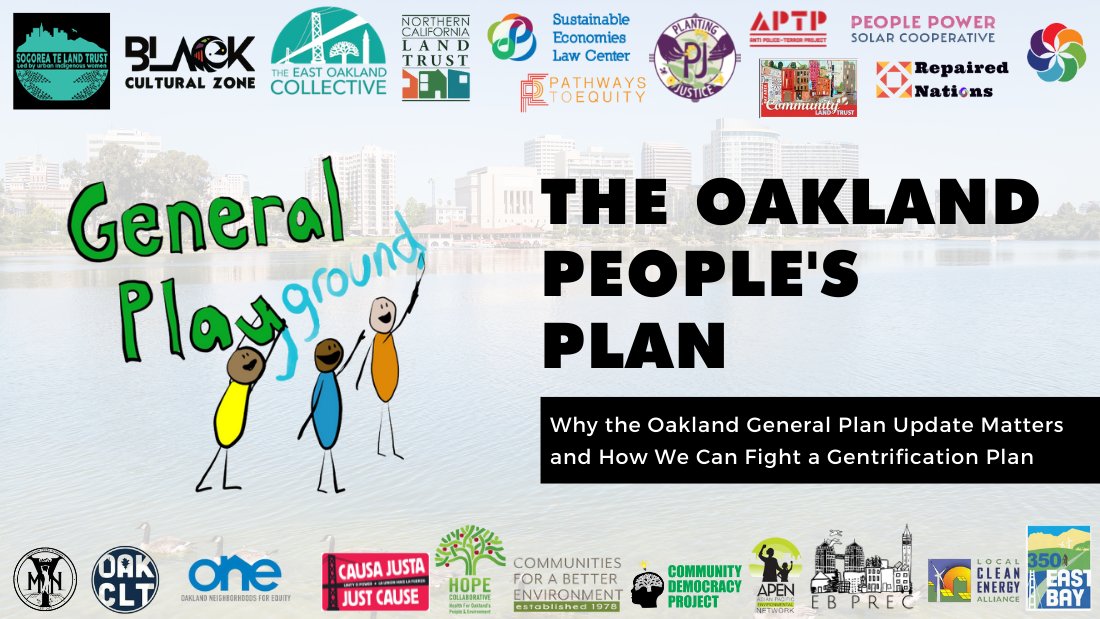 On June 25, 2021, a newly formed coalition of Oakland organizations called The Oakland People’s Plan, submitted a community-centered proposal to the City of Oakland in response to Oakland’s Request for Proposals (RFP) seeking a prime consultant to manage the City’s General Plan update. The Oakland People’s Plan (TOPP) formed instantaneously – in the space of one week – in response to feelings that the City’s approach to the Plan update would prevent meaningful community participation.

Staff and interns of the Sustainable Economies Law Center helped convene the group after conversations with several community organizations, planning professionals, and the City’s Planning Department. “The City says it wants to engage the community in this process, but their approach shows the opposite,” said Tia Taruc-Myers, an attorney with the Law Center who helped lead the effort. “We asked the City to extend the RFP deadline so that community groups could come up to speed and get involved, but the City refused. It appeared that only for-profit planning firms were planning to submit proposals.”

Oakland’s General Plan, which sets a vision and policy framework for development and land use, was last updated in 1998. The City’s RFP, released on April 30th, announced that the “General Plan Update is an opportunity for all Oaklanders to work together to create a visionary blueprint for the future of our City over the next two decades, shaped by the City’s commitment to intentionally integrate principles of fairness and justice into all City policies.” The City released a slideshow further stating an intent to “eliminate the root causes of inequity, resulting in more effective and equitable City policies, processes and services.”

The coalition is demanding that the City integrate the stated principles of equity and justice into the process itself. “The City appears to be corralling community groups into a corner, while positioning for-profit planning firms to lead the process,” said Law Center attorney Janelle Orsi. “On June 11, we spoke to several City staff, who said they would issue a second RFP to identify one community group to lead community engagement. It felt like a move to get community groups to step back and not engage with the main RFP.”

“We want the City to flip its priorities and put the community first,” said Orsi. “The way it’s unfolding, the City and a for-profit planning firm will be well on their way to defining the General Plan process by the time community groups get involved.”

The coalition’s proposal states: “TOPP offers Oakland an opportunity to center the community — instead of for-profit planning firms — in Oakland’s General Plan development. TOPP has no agenda other than to allow the people of Oakland to plan.”

The coalition’s proposal is unique in several other ways. It proposes to redefine the City’s Scope of Work and establish ongoing processes for community participation in planning and adaptation. It proposes an equal pay rate of $60.76 per hour for all people and organizations involved in the process, including any for-profit planning firms that may be hired as sub-consulants, even though such firms generally charge $100 to $350 per hour. The proposal also includes graphics and cartoons, and is designed to be readable and interesting to everyday Oaklanders.

“We think our proposal is quite strong, and we have several reputable planning firms agreeing to serve as sub-contractors if and when their expertise is needed,” said Taruc-Myers. This includes Michael McCormick of Farallon Strategies, formerly of the CA Office of Planning and Research, who co-authored California’s 400-page General Plan Guidelines. TOPP’s advisory team also includes a former member of the team that managed Oakland’s 1998 General Plan update. Nearly 30 community groups signed on to the proposal including Sogorea Te’ Land Trust, Homefulness, Communities for a Better Environment, HOPE Collaborative, Local Clean Energy Alliance, Causa Justa :: Just Cause, East Oakland Collective, Oakland Neighborhoods for Equity, Black Cultural Zone, Anti Police-Terror Project, and the Community Democracy Project.

“We pulled all of this together in one week,” said Taruc-Myers, “which demonstrates the power of collaboration and what community groups are capable of.” TOPP plans to continue organizing Oakland groups in coming weeks in anticipation of moving forward to the interview stage with the City. “We expect several other groups to join TOPP in coming weeks. This is going to be a powerful group and a transformative project,” said Taruc-Myers.

The Oakland People's Plan (Contract not granted) Every 20 years, Oakland updates its General Plan. The General Plan is what determines land use laws. Oakland has a long history of racist zoning policies and traditionally used a top-down approach to slowly reform those policies. To raise awareness about this process, we hosted a Policy Cafe and presented a short history of racist zoning laws in Oakland, the anatomy of a general plan update, Oakland's current request for proposals (RFP) and an invitation to form a dream team of researchers, lawyers, historians, mapmakers, artists, culture keepers, organizers, and mediators to democratize the general plan process! Click here to watch the recording of our Policy Cafe or click here to read the press release about our RFP submission. Unfortunately, the city did not accept our proposal but the fight is not over! Stay tuned for future policy campaigns.